Hira Mani's Husband Raised the Question After He Fell Victim to Corona.

When actress Hira Mani fell victim to Corona, her husband commented on his wife's post and commented, who will decide who got Corona from whom?

Hira Mani shared a photo of herself on Instagram on January 19, telling fans that her Corona test came back positive and she confined herself to home.

In her post, the actress appealed to the fans to use face masks and take special care of their children and family.

Hira Mani appealed to the people to protect their loved ones and themselves by strictly following all the precautionary measures against Corona.

In her post, the actress did not say whether other family members besides her were affected by Corona, nor did she say how she became a victim of Corona.

Several showbiz personalities and fans commented on Hiramani's post and prayed for her speedy recovery. 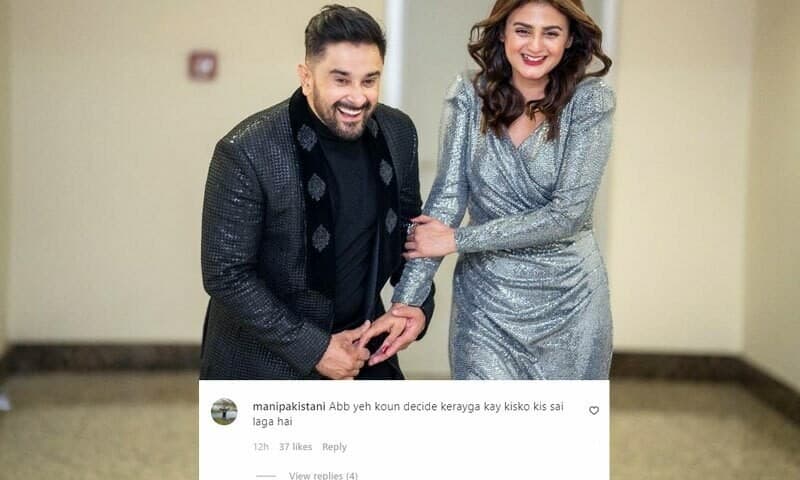 In addition to the showbiz personalities, the fans also wished him a speedy recovery and at the same time advised him to take care of himself.

Commenting on Hira Mani's Corona's post, her husband Mani also jokingly raised the question that it is yet to be decided who got Corona from whom?

Mani commented, "Now who will decide who got 'Corona' from whom?"

Fans cheered on Mani's comment, expressed their love for him and prayed for their recovery.

Hira Mani was vaccinated against Corona in June last year and shared her video on social media.

Her video went viral after she screamed in pain while being vaccinated.

Hira Mani also appealed to the people to get vaccinated as soon as possible to protect themselves and their families from Corona.

Like her, senior actress Bushra Ansari had recently recovered from Omicron. She also said that she recovered quickly due to vaccination.

In addition, senior actress Atiqa Odho also said two days ago that she fell victim to Corona and confined herself to the house.

Overseas Pakistani business tycoons are changing the image of Pakistan - A talk.

How to Check Ufone Number?

Related Posts
Princess of Saudi Arabia's Royal Family has been Missing
State Bank decides to cut interest rates by 1.5%
Terrible storm Amphan devastates Bangladesh, India, killing 84 people
British diplomat Steven Dick Dead in European country due to Corona virus
British Prime Minister Boris Johnson transferred to intensive care unit
150 Saudi royal family including Riyadh governor suffer from Corona?
Bilawal has to be a plea bargain, he is named in five companies
Critics Are Not Aware of the 'Reality', Tik Toker, Who Made the Video in Margalla 'on Fire'