Actor Yasir Hussain has demanded that the production house should also be punished for the shooting incident that took place during the shooting of a drama at the Defense Housing Authority (DHA) area of ​​Karachi on June 2. It may be recalled that on June 2, police said that a guard posted at a bungalow in DHA had opened fire during the shooting of a play, as a result of which nine people were injured. According to police, nine people, aged between 22 and 40, were injured in the firing by a guard named Gul B stationed at the bungalow acquired for the shooting and were rushed to a hospital for medical treatment. 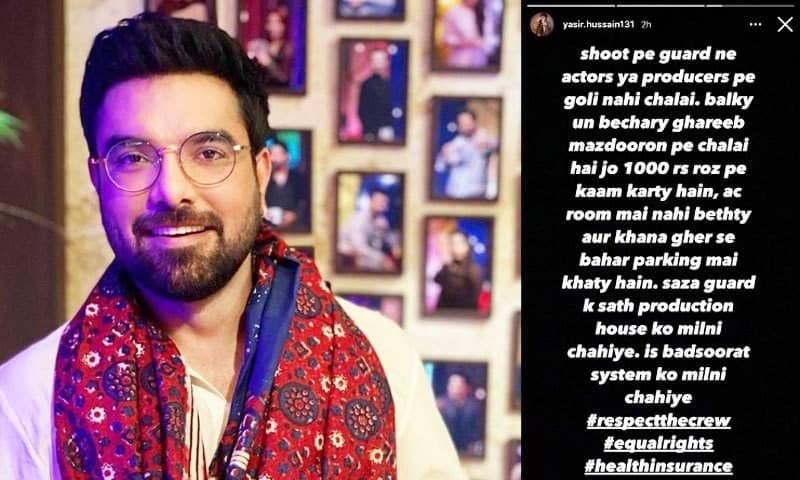 Other members of the team, including the cast of the play, were not reported injured in the shooting. Police arrested the guard after the incident and launched legal action. However, after the incident, Yasir Hussain demanded that action be taken against the guard as well as the production house which made the play. Yasir Hussain said in an Instagram story on the incident that during the shooting, the guards did not shoot at the producers or actors, but at the poor people who worked for a daily wage of Rs. Eat and do not sit in an air-conditioned room.

Yasir Hussain further wrote that the punishment for the incident should be meted out to the guards as well as the production house and this ugly system. The actor also used the hashtags 'Respect staff, equal rights, and health insurance' in his story. Yasir Hussain did not specify which production house was shooting the play and which play was being shot.

However, according to Galaxy Lollywood, Seventh Sky Production House's drama titled "Mohabbat dagh ki soorat" was being shot. The cast of the drama includes other actors including Sami Khan and Asma Abbas who survived the firing.

The proposal to amend the Russian President's constitution

Inflation in the Country has Been Steadily Rising