Educational institutions began opening in China on April 27, while in the European country of Spain, children were allowed to go out after six weeks.

The coronavirus started in China in December 2019 and all educational institutions were shut down in January 2020.

In China, more than 82,000 people have been infected with the corona and about 5,000 have been killed there, but on April 26, the administration in the city of Wuhan considered the center of the corona, claimed that all of the coronae there The patients recovered. 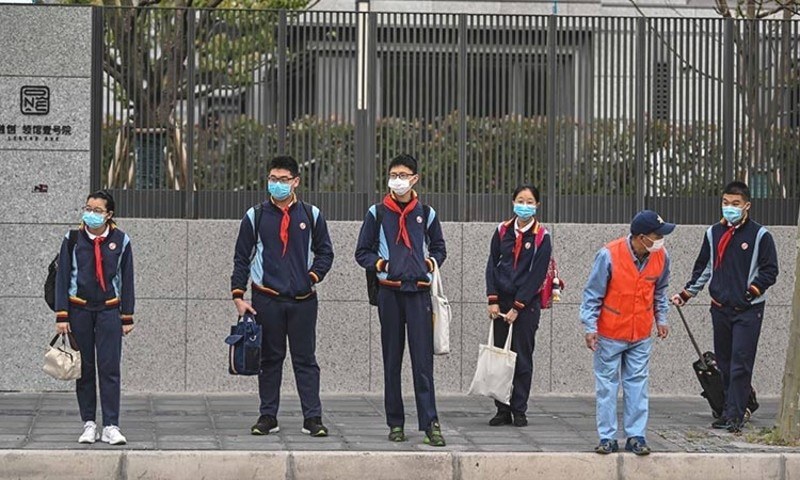 As soon as the institution opened, a large number of students arrived to receive an education. — Photo: AFP
Universities, including middle and high schools, opened in major cities such as Shanghai and Beijing on April 27, and the first day saw a crush of students, according to AFP.

After the opening of the educational institutions, the students and their staff have been instructed to take strict security measures and on the first day, all the students were seen in face masks while they also adopted the principles of social distance.

Business life resumed in early March, just before the opening of educational institutions in China, and now, where shopping malls have opened, cinema halls and entertainment venues have also opened. Even life has not been fully restored.

Fawad Khan Would Have Been Cast in 'The Crown' Instead of Humayun Saeed,' Sakina Samo Said

'Halima Sultan' Was Made a Star by Pakistanis, Yasir Hussain

Related Posts
2 Pakistani Girls Included in the European List of "Forbes 30 Under 30"
The Indian firing on the LOC in 2019 killed 59 civilians
Arab League urges to stop 'external interference' in Libya
Iran does not want war or tensions escalate: Javad Zarif
British MPs seek response from UK government over Delhi riots
A man who committed suicide at Jinnah Hospital tested negative for corona
The realme Azaadi Sale 2021 is Live with up to 30% Off on Daraz
Violence, pregnancy termination on Muslim pregnant woman accused of spreading Corona in India