ISLAMABAD: Two weeks after the appointment and transfer of Prime Minister Imran Khan in the media team, Dr. Shahbaz Gill has been appointed as Special Assistant for Political Relations.

The Cabinet Division also issued a notification in this regard.

Shahbaz Gill is the 15th person to be appointed as Special Assistant to the Prime Minister and it is the first federal cabinet in the history of the country to have such a large number of Special Assistants.

The federal cabinet has grown to 51 members with the inclusion of Shahbaz Gill, who previously served as Punjab Chief Minister Usman Bazdar's spokesperson. 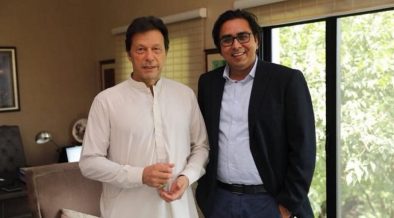 The federal cabinet has 27 federal ministers, four ministers of state, 15 special assistants, and five advisers, as well as 36 parliamentary secretaries who represent only the ministers during the proceedings of the National Assembly.

It may be recalled that Shahbaz Gill has been defending government policies in TV talk shows due to which the opposition parties had started calling him the self-proclaimed spokesperson of the Prime Minister.
Because no formal notice of his appointment was issued by the Prime Minister's Office.

Simultaneously, Pakistan Tehreek-e-Insaf (PTI) leader and Quaid-e-Awan in the Senate, Senator Shibli Faraz was appointed Minister for Information and Broadcasting.

It may be recalled that the post of Information and Broadcasting Minister had been vacant for the last one year.

woman seeking a divorce from her husband

Pepsi Battle of the Bands Tour with Mekaal Hasan Band

Internet service in Pakistan affected by fault in undersea cable