US President Donald Trump is on a two-day visit to India and his visit to social media has been widely discussed.

Indian consumers on social media have shown their enthusiasm by sharing many photos and videos after the arrival of Donald Trump, while some are also making memes in this regard.

But if you look at Donald Trump's account on Twitter, it seems that not only the Indian people are passionate, but President Trump himself is particularly passionate. 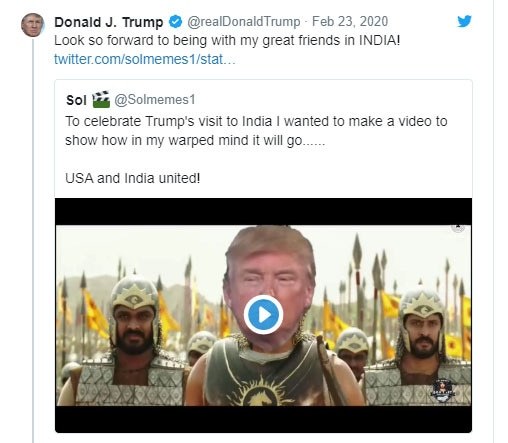 In this regard, the American president also retweeted a video on social networking website Twitter in which he appeared in the role of the successful Indian film 'Baahubali' which appeared in 2015 and 2017.

To celebrate Trump's visit to India I wanted to make a video to show how in my warped mind it will go......

In this video, the user pasted Donald Trump's face in place of Baahubali's face while his wife Melania Trump appeared in the video.

US President Donald Trump himself shared the video on his account, writing that he was waiting to meet his best friends in India.

Remember that US President Donald Trump, along with his wife Melania Trump, Sahibzadi and son-in-law, arrived in India on February 24, where Narendra Modi welcomed him and hugged him.

Both leaders had arrived at the historic Taj Mahal after the airport. On this occasion, other animals, including stray dogs, were removed from the roads around the Taj Mahal while strict security arrangements were made.

During Donald Trump's first visit to India, 14,000 security personnel were deployed in Ahmedabad, while special cleansing was done wherever the US President would go.

Kuchi populations were already evacuated along the path of Donald Trump's visit when banners were greeted every 10 meters to commemorate the visit of the US president.

Destroy 8 years of my life to save a relationship, Saba Qamar

Related Posts
No enemy can even look at Pakistan with an evil eye
PM directs to find 'extraordinary solution' to cut electricity, gas prices
Heavy snowfall and rains in Balochistan
Special flight operation ready to bring more than 5,000 Pakistanis back home
PAK in 2020, China ties will not be limited to CPEC, Chinese Ambassador
Palestinian President announces termination of all agreements with US, and Israel
The government has finalized National Electricity Policy 2020
Coronavirus test now possible in Karachi