Riots spread to several states and cities in the United States after a black man was killed by police
And curfews have been imposed, with President Donald Trump declaring the left-wing Antifa a terrorist organization.

A large crowd gathered in front of the White House, according to AFP
Police in riot gear stormed a rally on Friday, removing hundreds of protesters by truck.

A curfew has been imposed in several US cities following violent protests against racism.

Donald Trump described the protesting citizens for the last six days as local terrorists and accused them of looting.

Violent clashes erupted in a small park near the White House, with authorities using tear gas, spray and other measures to prevent damage to several buildings.

Local leaders in the United States have called on Minnesota police to play a responsible role in avoiding violence against protesters.

The administration has imposed night curfews in other cities, including Washington, Los Angeles, and Houston.

President Donald Trump, in a statement on the social networking site Twitter, declared the left-wing extremist group Antifa a terrorist organization and said that protesters from other states were joining the riots.

"The National Guard arrived in Minnesota and Minneapolis and took immediate action to silence other Antarctic anarchists. The mayor should have already taken such steps so as not to get into trouble," he said.

"In cities and states where Democrats rule, they should look at the process of stopping left-wing criminals in Manipur," he said.

"The National Guard has done a great job and it should be used in other states before it is too late," he said. Donald Trump announced that "America Antifa will be declared a terrorist organization." 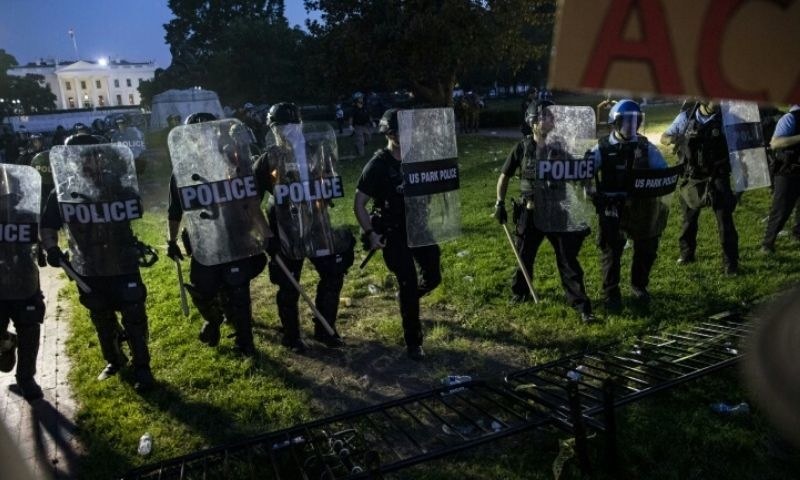 Protests are raging in the twin cities of Manipur and St. Paul, where thousands of citizens marched on the main highway.

"We have black sons, brothers, and friends and we don't want to see them die. We are tired of such incidents. This generation cannot afford it. We are tired of oppression," said Mona Abidi. '

"I want to make sure they are alive," he said, adding that hundreds of police and National Guard personnel have been deployed.

The video of the citizen's arrest showed police officers strangling him, while George Floyd could be heard saying he could not breathe.

George Floyd was later pronounced dead and protests erupted in the state.

Derek Chauvin is one of four officers fired after the video went viral and was charged with third-degree murder.

It was Derek Chauvin who kept George Floyd's neck on his knees with full force for five minutes, killing the black man.

The Lok Mela in the Federal Capital