New research from the Asian Development Bank (ADB) says the Coronavirus will have a significant impact on developing Asian countries through various channels.

ADB press releases said that local demand is likely to be sharply reduced, tourism and business travel, trade and productivity links, supply disruptions and health impacts are dependent on the outbreak of the virus.

According to the bank, the economic downturn depends on whom the epidemic outbreaks, which is by far the most uncertain.

The analysis cited global impacts of $ 77 billion to $ 47 billion, or 0.4 percent of the global growth rate. 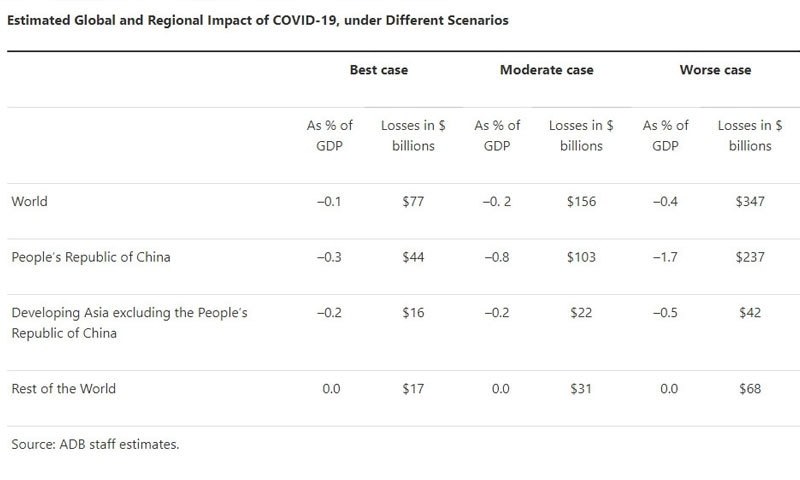 —Photo: ADB
According to the Asian Development Bank, moderate scenarios where precautionary behaviour and sanctions such as travel sanctions began to ease after 3 months of sanctions imposed in late January could reduce the global deficit to $ 56 billion, or 0.2 percent of the global growth rate. Will

Asian Development Bank chief economist Yasuki Sawada said there are many uncertainties regarding the Cod-19, including its economic impact.

"A number of scenarios are needed to provide a clear picture of its potential disadvantages," he said. "We hope this analysis can provide governments with clear and decisive support in removing the human and economic impacts of the outbreak."

This analysis gives the Economic Impact of Cod-19 on Developing Asia the full details of the views considered in this regard.

It estimates the impact on developing Asian economies and the sectors of those economies, including the worst scenario of this economy in case of a significant outbreak.

This should not be interpreted as predicting that an outbreak will occur, but rather to provide guidance to governments as they consider appropriate responses.

All estimates and scenarios in this regard are available on the Asian Development Bank website and will be updated as the situation arises further.

Bushra Ansari Got Divorced After 36 Years Because of Her Daughters

Related Posts
Mother says she did not want to give birth to me, Fatima Sohail
Names of officers benefiting from Income Support Program should be made public, PM
Corona poses a threat to EU failure, Italian Prime Minister Giuseppe Conte
'The public does not trust the system' PM Imran Khan
Myanmar forces commit 'war crimes' against Rohingya, the commission says
Private schools are directed to reduce fees by 20%
India: Toxic gas leak from chemical plant kills 9
Trade officers will work on the cancellation of export orders