The virus will spread further.

We must open up the tourism sector."

Writer and columnist Nadeem Farooq Paracha summed up the briefing given by Prime Minister Imran Khan to the nation on the situation of Corona in the country and the latest government decisions taken in the background.

In his briefing, Imran Khan said, "Look, the virus has spread, the virus will spread." I have been saying since day one, the death toll will rise further. It is the responsibility of the people to cope successfully with this situation. We think tourism should be opened because, in areas where there is tourism, there are only three or four months of summer to do business.

Tourism is the main earning source for regions like Khyber Pakhtunkhwa & Gilgit-Baltistan. If their business season will be spent under a lockdown, many areas will go into poverty. The governments of both regions will set the SOPs to re-open their tourism sector#COVID19 pic.twitter.com/cbEXxOvfyJ

He further said that if these three, four months pass in lockdown, then there will be poverty in these (tourist) areas. I beg you, you (the people) have to take responsibility, be a responsible nation, and follow the SOPs.

Perhaps these were the words of the Prime Minister which Nadeem Paracha summed up in this way: 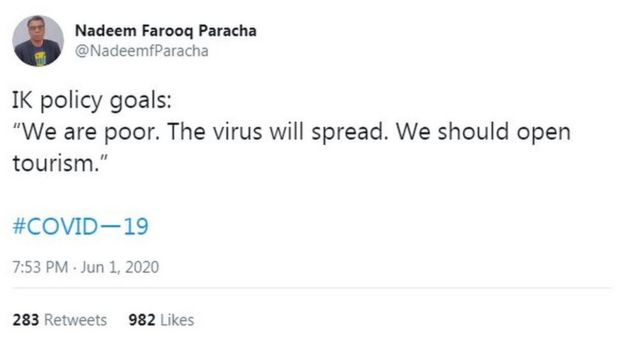 It may be recalled that on June 1, when Prime Minister Imran Khan hinted at opening a tourism department in the country, a record number of Corona victims in Pakistan on the same day, ie 3938 new patients in a day.

This was the largest one-day patient increase in more than three months since the first corona case was reported in Pakistan on February 26.

Imran Khan said that according to government statistics, there are 12 to 150 million people in the country where if the head of the household does not earn on a daily basis, there is a risk of hunger at home. "The rich individuals were yelling 'Lock down, lock down' while the day workers had an alternate attitude. As Prime Minister, I was looking at both sides."

The seriousness of Corona's proliferation in Pakistan and the Prime Minister's announcement to open up the tourism sector may not have been digested by a few users on the social networking site Twitter.

Many users criticized the prime minister's speech, with many calling the decision "stupid" in the light of the statistics, while many resorted to satire and criticism.

Another Twitter user Saba Haider asked other users, "Do you remember that we (as children) used to say, 'You have to see the whole of Pakistan before you die?' Imran Khan has taken this matter seriously. 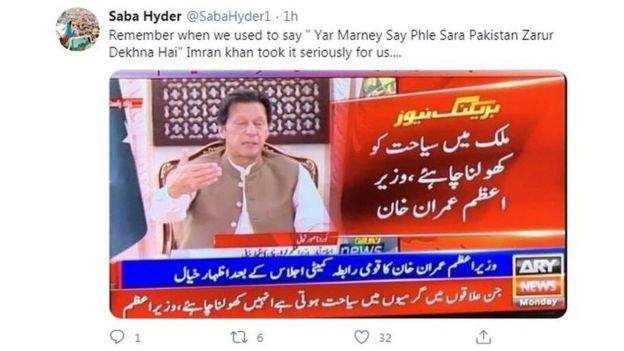 Saad Sohail, a Twitter user, said that the government had imposed a lockdown on 250 cases but Imran Khan was saying on more than 72,000 cases, "Boys, should there be some tourism?" 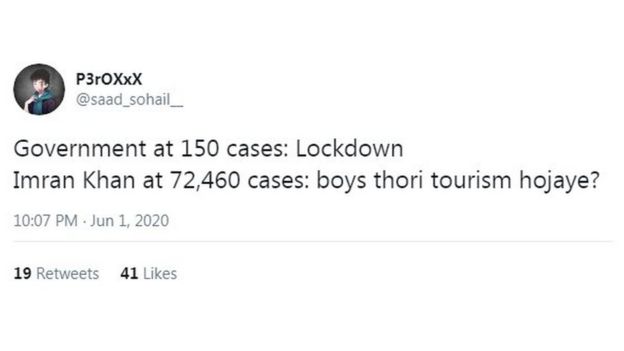 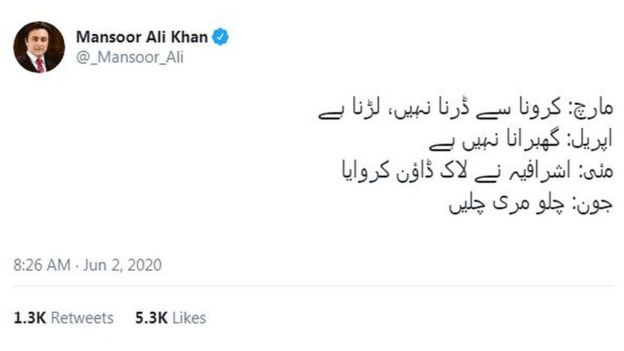 The Prime Minister concluded his briefing to the nation by saying: 'The virus has to grow. And people will get the virus, it will spread. I am sorry to say that our deaths will also increase. You are responsible for how we live with it in the future. The more you follow the SOPs, the more careful you will be... That would be great."

Fennel Benefits and Side Effects

Which player does Chris Gayle consider a 'snake'?

Occupied Kashmir: A case filed against a female journalist who interpreted torture with pictures

25 rupees per Kilogram increased by LPG