Islamabad: China has requested Pakistan to open a border between the two countries for one day on Friday (March 27) so that medical goods can be delivered to control the Coronavirus.

The Khunjerab Pass is usually opened in April but was announced to be closed indefinitely due to the spread of Covid 19.

The Chinese Embassy in a letter to the Foreign Ministry said that the medical items of the governor of China's Shenyang Uyghur want to donate to Gilgit-Baltistan, copies of the post were sent to National Disaster Management Authority (NDMA), Gilgit-Baltistan. Government and Ministry of Health were also sent. 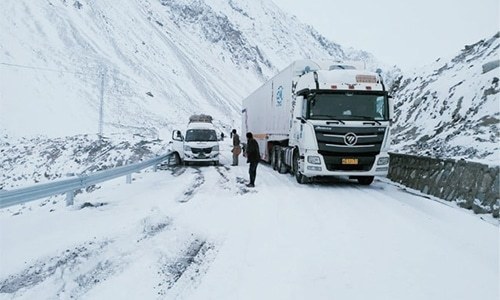 It is understood that the donation is being made in response to Chief Minister Gilgit-Baltistan Hafiz-ur-Rehman's request to the governor of the Shinjiang region to fight the Coronavirus in the province.

The Chinese Embassy's letter further stated that "the goods are ready to be delivered to Gilgit-Baltistan via Khunjerab Pass at 9 am on March 27 at 9 am."

The letter added, "It is, therefore, requested that the border be temporarily opened on this date and in this regard it is suggested that the Pakistani authorities agree and make all preparations before the said date so that all the goods will be readily available."

The letter also stated that a truck and essential cargo were needed to transport the goods so that the goods could be taken down.

It is to be noted that under the 1985 border protocol agreement, Khunjerab Pass is closed from late November to early April, through this border trade activity between the two countries are the only land route between Pakistan and China and in the name of the slow dry port.

On the other hand, a Gilgit-Baltistan government official that relevant federal agencies, including the National Logistics Cell, the Customs Department and the Federal Intelligence Agency, have suggested to the Gilgit-Baltistan government that the cargo be transported by a C-1 30 aircraft. It may be difficult to make arrangements for only one day as there is no possibility that the Khanjarb Pass will be opened by April 1st.