A Canadian-run school and real estate firm in North America has fired an Indian-origin Hindu citizen for tweeting anti-Islam and launched an investigation.

According to the Canadian broadcaster CBC, Ravi Hooda, a Hindu man of Indian descent, responded to a tweet on April 30 by expressing hatred towards Muslims and spreading hate speech in his response.

According to the report, Ravi Hooda used inappropriate words against Muslims in response to a tweet from the Canadian government regarding allowing Muslims to give azans on loudspeakers due to the month of Ramadan. 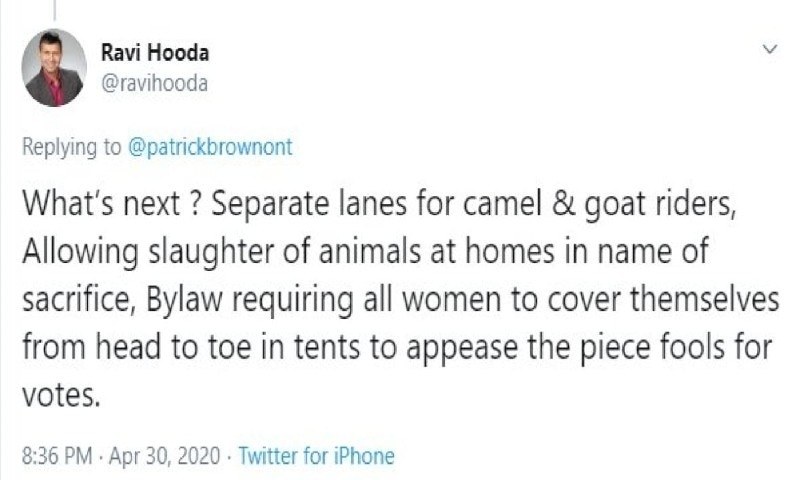 The Indian-origin man in his tweet predicted possible other permissions after allowing Muslims to call to prayer and wrote that after the said permission, the next step now is for Muslims to take to the streets to bring sacrificial animals home. Special lines will be provided.

He wrote that as a next step, special road lines would be provided for Muslims to bring camels and sheep to the house or to the slaughterhouse, and they would also be allowed to slaughter animals in their homes in the name of sacrifice.

Ravi Hooda wrote sarcastically that for those women who have to cover their bodies from head to toe, the next steps will be taken to please such people and for their votes.

According to the CBC, Ravi Hooda's anti-Muslim tweets were criticized by many, with dozens calling for action against him, saying that no one in Canada should use anyone in the name of religion. Should not be allowed to hurt.

Following public outcry, the Peel School Board, a leading school network in Brampton, Canada, said in a social media statement that an Indian-origin man who tweeted anti-Islamic had been fired and an investigation was underway.

In addition, Ravi Hooda was fired by a real estate firm. The Indian man was working simultaneously in a real firm, including the Peel School Board.

The Peel School Board is part of Canada's largest school network and has more than 150 schools nationwide, and Ravi Hooda has been associated with the organization for many years.

Ravi Hooda also shut down his Twitter account after people criticized him for tweeting anti-Islam, while the school network launched an investigation into further action against him.

Remember that in countries like Canada, it is illegal to target someone on the basis of religion, color, race, or sex, and the perpetrators are prosecuted.

In Canada, loudspeakers are not prohibited under normal circumstances, but mosques are instructed to keep the volume low so that other people are not disturbed.

But this time during the month of Ramadan, many Muslims were having difficulty breaking the fast due to the coronavirus being locked down, which is why the Canadian government this time exclusively allowed Muslims to use loudspeakers. ۔

The presence of powerful ingredients in Bitter Ground that prevent cancer