Actress Neelam Munir, who starred in the romantic comedy film 'Chakkar' released on Eid-ul-Fitr, has clarified the news of her engagement and marriage and appealed to the fans not to believe the news spread on the internet. Addressing the fans on the Instagram story, Neelam Munir said that the news spread about their engagement and marriage is 100% false, they should not be believed.

The actress clarified that they are neither engaged nor married. He appealed to the fans not to believe the false news and to know that the actress is not married yet. 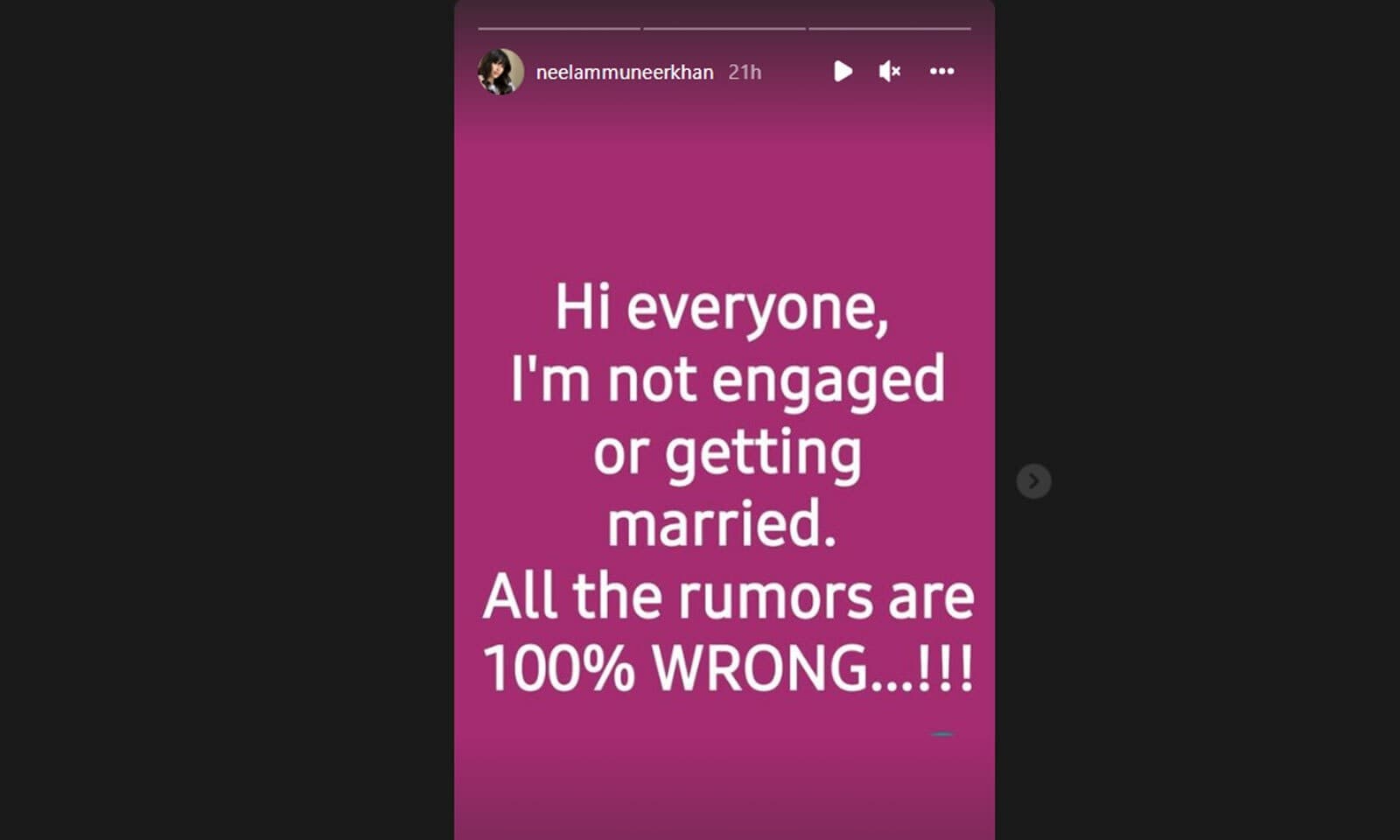 Neelam Munir made the remarks at a time when news of her marriage was once again circulating on some social media pages and YouTube. Neelam Munir's old photos were shared and it was claimed that she started a new life. News of Neelam Munir's engagement and marriage has spread several times before, usually by sharing photos and videos of the bride's role in a bridal photoshoot or a drama performed by the actress and claiming their marriage. Has been going

Rumors of their marriage were also spread in the year 2021 and he had rejected such news even then. In the past, Neelam Munir had said in an interview about marriage and love that she does not believe in making love or developing a relationship before marriage. In an interview with Fuchsia Magazine, Neelam Munir had said that she does not believe in any kind of love and dating before marriage because she thinks it is a strange thing to marry a girl before marriage. , Have to beautify and get ready.

The actress had explained that everything works after marriage but she does not believe in love before marriage. At the same time, she said that she would marry someone who respected her family and especially other people besides her mother and sisters.

The Tecno Spark 7 Pro, the Gaming King, Is Now Available in Market | TECNO

Fitness tests of national cricketers will be taken online

Related Posts
HAMZA ALI ABBASI AND NAIMAL KHAWAR ARE YET TO TIE A KNOT
From Corona to worldwide destruction, the death toll has increased to 70,455
Sindh: Traders demand softening in lockdown
Guide touch screens installed in the sacred mosque have been shut down
Former Popular Actress Firdous Begum Has Passed Away
Sharmeen Obaid-Chinoy Is One of the 18 Best Film Directors in Asia
WHO has declared the Coronavirus an international emergency
Princess Harry and Meghan Markle Blessed With a Daughter