Anusha Ashraf angry on Harassment of Woman by Pakistanis in Turkey

Model, video jockey (VJ) and actress Anusha Ashraf expressed outrage over alleged harassment of women in Turkey by Pakistani men, saying such people should be given character certificates, not visas abroad. Anusha Ashraf expressed her anger on Instagram by sharing a screenshot of the news about Pakistani men harassing women in Turkey and taking pictures and videos of them without permission.

Anusha Ashraf wrote that keeping in view the thinking of Pakistanis who have expressed concern over Halima Sultan's dress, they should be given a certificate or diploma to consider women as human beings instead of being given a visa to any country in the world. The model and actress wrote that such Pakistani men should be given a certificate that they see women not as a result of their dress but as human beings.

Anusha Ashraf wrote that not all men in the world like such Pakistani men but many women always consider themselves insecure. 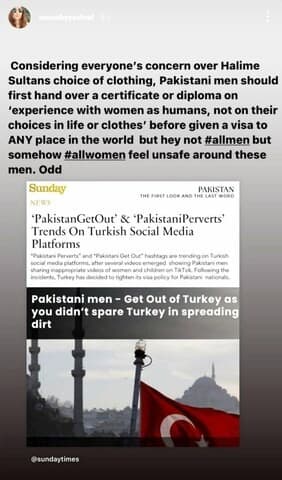 The screenshot of the news that he shared said that trends like 'Pakistani get out' and 'attitude of Pakistanis is unacceptable' started running on Turkish social media. According to the report, the aforementioned trend has come to the fore on Turkish social media since the beginning of this month in the Turkish city of Istanbul in the case of alleged harassment of women by Pakistanis and taking pictures and videos of them without permission. Came to the fore.

Rumours were circulating on social media that Pakistanis in Istanbul had made videos of local women walking around in bold clothes and uttering inappropriate phrases for them and after the videos went viral, trends were launched against Pakistanis.

Turkish people have still seen tweeting and posting on social media on trends like 'Pakistani get out' or 'Pakistanis are unacceptable'.

There are reports that Pakistanis in Turkey are being closely monitored after the incident and the government has formulated some new policies.

Pakistani men caught stalking Turkish women and taking their illegal photographs. Pakistanis take their extremist attitude abroad & then cause problems for countries who let them in. Sorry, the world is not like Pakistan. I don’t want Pakistanis in Turkey.#pakistaniperverts

Ushna Shah a victim of OCD