India has been facing the worst air pollution challenge for many years and especially in the capital of india New Delhi, air pollution reached its worst level in history last winter.

However, according to a report by the US space agency NASA, the nationwide lockdown due to the coronavirus in India has brought the pollution to its lowest level in 20 years.

"We expected to see a change in the atmosphere during the lockdown, but I have never seen such a reduction in pollution this part of the year," said Pawan Gupta, a scientist at the University Space Research Association.

This report examines air pollution through aerosol optical depth, in which air pollution is measured by the degree to which light is being emitted from these air particles. 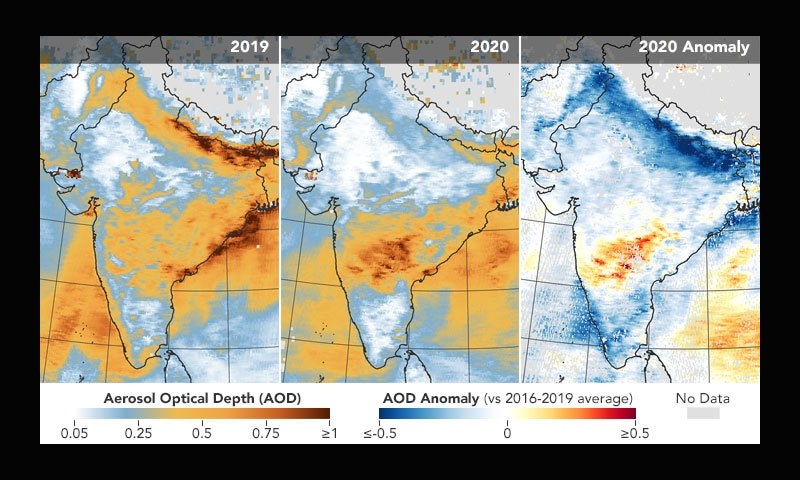 In northern India, the rate was extremely low in early April and has reached a 20-year low, the report said.

Ground-level surveillance agencies in India also say that air pollution has been significantly reduced during the lockdown.

Not only in India, but thanks to the lockdown, the atmosphere around the world has clearly improved.

Shoaib Malik and Rameez Raja Conflict at the issue of retirement

Related Posts
Bollywood's 'Mafia Gang' Will Kill Me, Payal Ghosh
CPEC project contracts awarded to blacklisted companies, Alice Wells
The matter of NAB ordinance will be discussed in Parliament: Firdos Ashiq Awan
In Saudi Arabia, for the first time ever allowed to participate in women's cards competition
Supreme Court: The court intervenes if government plans fail the transparency test
Nirmala Maghani Sends Notice to Zulfi for Stealing 'To Jhoom' Lyrics.
Corona Virus: Europe Announces to Close Borders for 30 Days
The decision to set up a driving school for women in Mecca