Bollywood's 'Panga Girl' Kangana Ranaut has always been in the news for her domineering behavior, but for the past two days she has been in the headlines for breaking into her home and threatening herself.

According to the Indian newspaper India Today, the Brihan Mumbai Municipal Corporation (BMC) had ordered the evacuation of a part of a luxurious bungalow in the Pali Hills area of ​​Bandra, a suburb of Mumbai, the capital of Kangana Ranaut state in Maharashtra.

The Mumbai Municipal Corporation had given Kangana Ranaut 24 hours, but the actress had approached the Mumbai High Court seeking a week's respite from the management. The actress was not in Mumbai at the time of the bungalow demolition, but her lawyers had approached the court and the actress reached Mumbai from her home state of Himachal Pradesh only after the house was vandalized.

Kangana Ranaut termed the official demolition of his bungalow as the death of democracy and also used harsh language against the extremist Shiv Sena, the ruling party in the state of Maharashtra, calling it Sonia Sena instead of Shiv Sena.

After Shiv Sena's harsh criticism from the actress, her workers along with Karni Sena workers also planned to attack Kangana Ranaut at Mumbai airport and a large number of workers also arrived at the airport and protested against the actress' arrival. He also shouted slogans.

According to India Today, after being vandalized by the municipal corporation, Kangana Ranaut also filed a petition in the Mumbai High Court to stop the vandalism of the bungalow and the court held a brief hearing on her petition.

According to NDTV, at the request of Kangana Ranaut, the Mumbai High Court in a short judgment ordered the Mumbai Municipal Corporation to immediately stop the demolition of the actress' bungalow.

By this time, however, the municipal corporation officials had broken into a good part of the actress' bungalow, but they had stopped the demolition following court orders. After the vandalism in her house, the actress sharply criticized Shiv Sena and her leaders in tweets, after which they also started receiving threats. 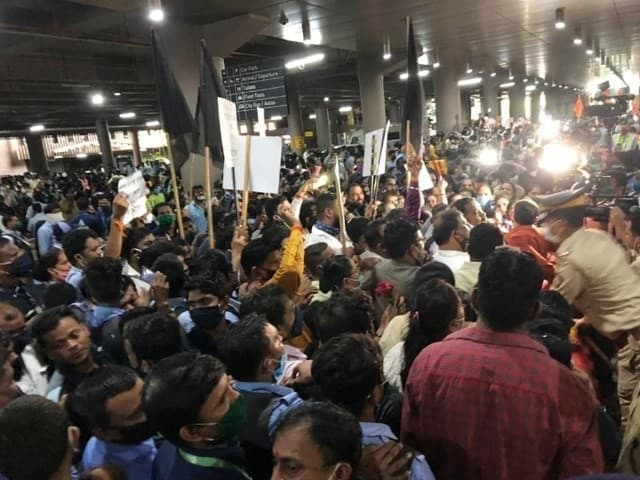 Many Indians were also angry at the actress for declaring Mumbai as Pakistan's occupied territory after her house was vandalized and said that when such a Muslim actor says so, he is ridiculed for going to Pakistan and Now she herself is declaring the most important city of India as part of Pakistan.

Interestingly, after the Mumbai administration's collapse, the actress, who had declared Mumbai a part of Pakistan, was threatened by other organizations, including Shiv Sena, when the central government of India announced extremely high security for the actress.

According to the Indian Express, India's Home Ministry has announced Y-Plus security for Kangana Ranaut, which is usually provided to ministers, senior government officials, or the head of a government organization.

Kangana Ranaut is considered a supporter of the ruling Bharatiya Janata Party (BJP) and has met Prime Minister Narendra Modi several times while she has been seen from time to time promoting the BJP's political ideology.