Countries around the world are fighting the global coronavirus epidemic, as well as developing vaccines against the disease. It should be noted that the Chinese city of Wuhan was the first city in the world where the administration first imposed a lockdown on January 23, 2020, due to the coronavirus.

The coronavirus began in Wuhan in mid-December 2019, but Chinese experts later admitted in a report that coronaviruses had appeared in November 2019 but had not been diagnosed. It took some time for the experts to identify. Due to the rapid spread of the coronavirus, Chinese authorities initially temporarily closed Wuhan in early January 2020, restricting citizens to their homes, but the city was later completely locked down.

Due to the lockdown, Chinese authorities were able to control the coronavirus, and for the first time, no new cases of the corona were reported from the city of Wuhan on March 19, 2020, after which a severe lockdown was lifted on March 23. Was During the severe lockdown in Wuhan, two Chinese filmmakers, dressed in anti-epidemic protective clothing, were filming in hospitals in Wuhan where there was a huge rush of patients.

There, they filmed shocking videos in which plague-stricken citizens knocked on hospital doors, medical staff were exhausted, and relatives of Corona victims said goodbye to their loved ones. Was seen grumbling in front of the authorities. Now all of these videos and photos have been edited by New York-based director Howe Edit and presented in film form at the Toronto Film Festival. 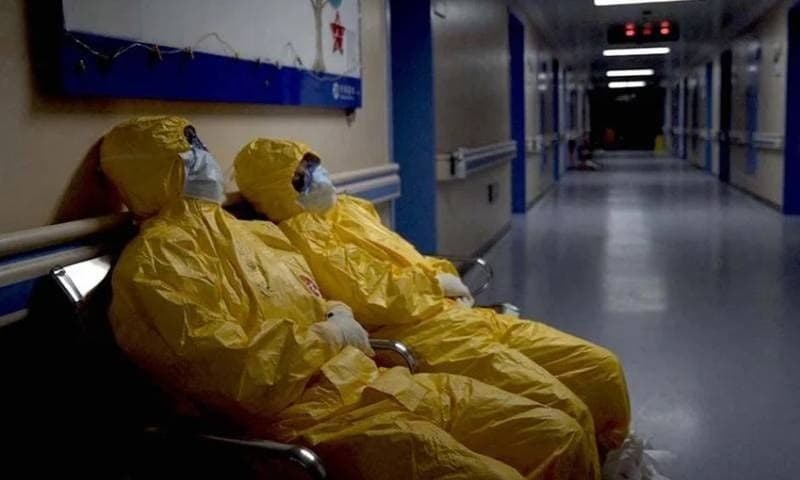 The film, titled '76 Days', was screened at the Toronto Film Festival earlier this week, according to an AFP report published in the First Post. The film was named after a 76-hour lockdown in the Chinese city and center of the coronavirus in Wuhan, the first major documentary to be shown in theaters from the original center of the epidemic. The film, set in a world of cinematic horror, does not use voice or interviews but relies on footage of doctors and patients dealing with a new and frightening reality.

Hao Wu had earlier contacted the two filmmakers, one of whom did not want to be identified for security reasons as they flew to China on New Year's Eve, where they imposed the strictest lockdown in Wuhan. Footage sent to Hao Wu by the two men revealed how they were able to reach everywhere during the chaos in the early weeks of the unknown disease, but also faced personal risks and difficulties. "It was horrible for the filmmakers to photograph the situation, they were fainting, it was very hot there," Hao Wu told AFP about the film.

He said that a few times the filmmaker stopped vomiting in Vaccine China but he could not vomit because once the Personal Protective Equipment (PPE) was taken off he would have to go out and not come in again. Hao Wu added that it was like a battlefield shooting experience. However, Hao Woo had a personal reason to work on the project, as his grandfather died of cancer after the outbreak and could not find a place in the hospital due to the coronavirus.

"Initially, I was angry with the Chinese government, I wanted to know whose fault it was, who caused it," Hao Wu said.

He added that when the epidemic spread, it turned into a major tragedy, and other countries, such as the United States, were affected, so the desire to blame in these circumstances turned into the desire to make money. As a human being, how to share the experience of living in these conditions with others. Surprisingly, despite the tight control of the Chinese media, it was much easier to access.

According to Hao Wu, filming in New York hospitals proved to be more difficult legally than in China. He said the hospital in Wuhan, where there was a shortage of PPAs, initially welcomed coverage because it could help them get relief supplies and the attention of volunteers.

Instead of politics and accusations, the 76 days lockdown focuses on personal stories of tragedy and bravery, hope, and despair, which were repeated around the world after its release in China. It showed the medical staff holding the hands of patients away from the family and encouraging them, and the two, dressed in protective clothing, hit each other on the head and expressed their adoption.

It is unknown at this time what he will do after leaving the post. He has been accused of covering up the epidemic.

"I would be happy to show this film in China because I think Code 19 has had an impact on the psyche of the whole country," Hao Wu said.

"Most Chinese are proud that their country has overcome the disease, but it is also a psychological trauma," he said.

Related Posts
As Soon as the Second Film Is Released, 'Wonder Woman 3' is Announced
The First Trailer of Robert Pattinson's Movie 'The Batman' Has Been Released
The Upcoming Movie SUPERSTAR
Film Team has Released the Teaser of NO TIME TO DIE
Films not released this year will also be nominated for an Oscar
Fawad Khan Would Have Been Cast in 'The Crown' Instead of Humayun Saeed,' Sakina Samo Said
Films Will Be Released on This Eid Two Years Later
2 actors of Game of Thrones, Peter Dinklage, and Jason Momoa going to work together on a vampire movie