Modi Is Feared of Freedom Slogans in Films Too

According to the report of Baghi TV, Modi was also frightened by the slogans of freedom in films. The Indian film industry came under attack from the BJP. The Modi government has filed an FIR against Tandav. Filmmakers and actors were forced to apologize. The movie Tandav was released on Netflix. The film stars Saif Ali Khan and Dimple Kapadia in the lead roles. The FIR was filed on the ground that the religious sentiments of Hindus were hurt in the film.

But in fact, the FIR was dropped after the film included dialogues and sketches similar to the slogans of independence in occupied Kashmir and the style of protest of the peasant movement. The film's organizers were forced to issue an unconditional apology. In a similar incident, comedian Munawar Farooqi was arrested for an unsolved crime. Munawar Farooqi was booked in Indore, Madhya Pradesh on January 1, 2021, in connection with a dialogue against possible Hindus in a stage play.

We just want to share a quick update with everybody. We are in further engagement with the Ministry of Information & Broadcasting to resolve the concerns that have been raised. We value your continued patience and support, and should have a solution shortly. https://t.co/Yp8kogTlvs

The show had not even started when Munawar Farooqi was abducted by angry Hindus led by Aklavia Kaur, the son of a BJP MP. Eklavia is the chief of the Hindu Ashes Sangathan. The enraged mob-handed over Munawar Farooqi to the police. Police admitted that Munawar Farooqi did not commit any crime. Not only was the FIR cut off but he was also held incommunicado for 18 days. Indian courts are now being pressured to send Munawar Farooqi to jail. India's police and judicial system is not only at the forefront of Hindutva propaganda but is completely under the control of the BJP.

Are religious sentiments only for Hindus? Is India only for Hindus? Be it the Golden Temple or the Babri Masjid, the religious rites of the Sikhs, or the religious freedom of the Muslims. The BJP has strangled all other minorities. This has recently been expressed by the UK Parliament. Now Bollywood is also a target of Hindutva. Is this the real face of India? India was once proud of its soft image. Today, Indian society, customs, and now culture are in grave danger. 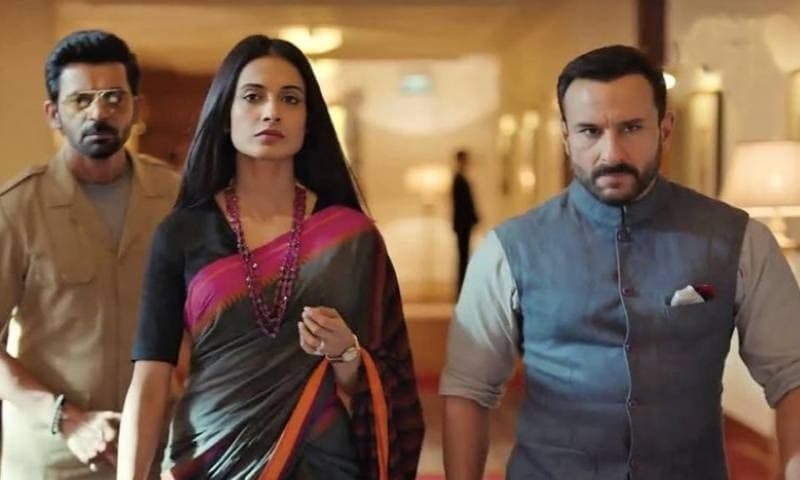 After the media, culture is now under the control of the Modi government. Filmmakers and actors were forced to apologize. The film was released on Tan Dev Netflix. The main characters of the film were Saif Ali Khan and Dimple Kapadia. The FIR was registered on the basis of similarity with the slogans of freedom and the style of protest of the peasant movement. The FIR said that there was a lot of grief and anger on social media against the content of the web series.

It has been reported that in the first episode of 17 minutes, the Hindu Goddess Datta has been misrepresented and foul language has been used which is hurting religious sentiments. In the 22nd minute of the same episode, caste Attempts have been made to set the clash on fire. Throughout the web series, a person holding the prestigious post of Prime Minister is portrayed in a very unfortunate manner.

Police have registered a case against the series' creative head Aparna Prohat, series director Ali Abbas Zafar, producer Himanshu Krishna, scriptwriter Guru Solanki on charges of spreading hatred in the society and creating animosity between different religions. Several leaders of the ruling Bharatiya Janata Party, a Hindu nationalist party, have called for a ban, as well as stern action against the makers of the series.

Actor Saif Ali Khan's web series 'Tandav' released a few days ago has caused a stir in India. The actor is being threatened by extremists. Hindu organizations are also demanding a ban on the web series. Protests against the series continue in various cities across the country.

A heavy contingent of police has been deployed outside the homes of Saif Ali Khan and Kareena Kapoor in Mumbai's Bandra area in response to threats and protests. It is believed that the web series 'Tandav' directed by Ali Abbas Zafar includes Saif Ali Khan, Dimple Kapadia, Zeeshan Ayub, Sunil Grover, and other actors while the series has been released online due to controversial content.

The BJP and several hardline Hindu organizations have accused the nine-episode web series of insulting Hindu deities and banning its broadcast. BJP workers have also staged protests in several states. Meanwhile, a case has also been registered against Mirzapur, one of the most popular web series released recently. Police say that according to the person who has registered the case, religious sentiments have also been hurt by this web series.

Observers say that intolerance towards creative freedom has increased in India over the past few years, otherwise, the films and dramas of the past would have been much more critical of the outdated society and appreciated by the people. However, now under Modi, people take to the streets at the slightest provocation and demand a ban on such creative works.

I Will Choose Khalil-ur-rehman Qamar Instead of Marvi Sarmad, Feroz Khan