Fawad Khan Would Have Been Cast in 'The Crown' Instead of Humayun Saeed,' Sakina Samo Said

Senior actress Sakina Samo has objected to Humayun Saeed being cast in Netflix's web series 'The Crown,' saying that Fawad Khan should have been cast for the role of Pakistani doctor.

Two days ago, it was reported that Netflix had cast Humayun Saeed for the fifth season of 'The Crown,' a web series about the British royal family.

The news was given by the editor of magazine Hassan Zaidi through a tweet, after which other showbiz personalities, including Mahira Khan, mentioned Humayun Saeed in tweets and congratulated him.

Although the Crown team, including Humayun Saeed and Netflix, has not confirmed this, Pakistani showbiz personalities continue to congratulate Humayun Saeed. 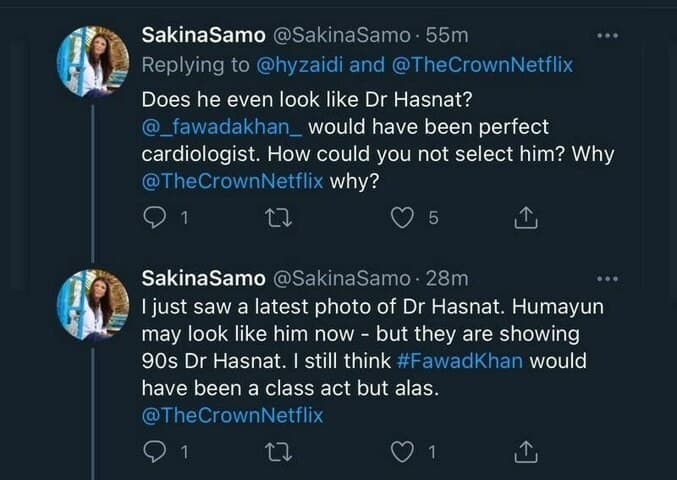 While Humayun Saeed is being congratulated, senior actress Sakina Samo looked angry at him being cast and said that Fawad Khan would have been cast instead.

Sakina Samo commented on Hassan Zaidi's tweet and expressed her displeasure over the casting of Humayun Saeed in 'The Crown.'

According to the news, Sakina Samo deleted the comments made on Hassan Zaidi's tweet, in which she talked about casting Fawad Khan instead of Humayun Saeed.

BIG BREAKING: Can confirm that the next season of Netflix’s The Crown @TheCrownNetflix will also star our very own @iamhumayunsaeed. He will be playing surgeon Dr Hasnat Ahmed, Lady Diana’s alleged ‘true love’ who she apparently called “Mr Wonderful.” pic.twitter.com/ChrsVqnCcK

Although Humayun Saeed looks like Pakistani Dr. Hasnat presently, Sakina Samo stated in the deleted comments that the web series would depict the 1990s era, Fawad Khan should have been cast in the part of Pakistani doctor.

He further wrote that he thinks that Fawad Khan should have been cast, and at the same time, she asked Netflix why he choose Humayun Saeed.

Similarly, he replied to a woman who commented on Hassan Zaidi's tweet that he did not think Humayun Saeed would have been cast at the behest of Jemima Goldsmith.

Thank God , Indian actor was not selected for this role. maybe credit goes to #Jemimakhan for selecting Humayun as she was one of the story consultants for season 5.

Sakina Samo wrote in reply to the woman that Netflix people may have auditioned four other actors along with Humayun Saeed, and this is a simple process; however, she is making a film about a story revolving around a Pakistani family. Shabana Azmi is also involved; he must have done that there.

Sakina Samo gave the above answer to the woman's question, in which she expressed happiness over Humayun Saeed's participation in 'The Crown' cast and asked if Jemima khan may have cast the Pakistani actor because She was part of the story writing team for the fifth season of The Crown.

While the cast of Humayun Saeed's first original Netflix series is being debated among the general public, showbiz personalities are also expressing their views on it.  It is unknown what he will do after leaving the post.

According to reports so far, Humayun Saeed will be seen playing the role of Dr. Hasnat, the alleged beloved Pakistani surgeon of British Princess Lady Diana in Netflix's web series 'The Crown.'

The Crown is a web series about the British royal family, with four seasons released.

Is Saba Qamar getting married?

Related Posts
Despite the Epidemic, Cinemas in Many Countries Opened, the Film 'Tenet' Was Released
Modi Is Feared of Freedom Slogans in Films Too
What Does the Love of Watching Horror Movies Say About Personality?
After the success of 'Aladdin', the work on the sequel has now begun
Fear of Corona virus: The release of NO TIME TO DIE will be postponed until November 2020
Up coming movie Naram garam
Teefa in Trouble has been released on Netflix
Confirmation of 'Dead Pool' three