The Novel Corona virus, which was launched in Wuhan, China, in December 2019, was predicted in a film released a decade ago, followed by a book about such a disease, later He was linked to the Disney movie 'Tangled' and then also mentioned Michael Jackson.

And now a series of video streaming services Netflix releases in 2018 is also gaining attention.

This Netflix Korean series is titled 'My Secrets Terriers', which in the 10th episode describes a life-threatening disease that was infected with the Coronavirus and spread to start a biochemical war between humans.

Some scenes in this series are also going viral on social media, one of them seems to say that 'Coronavirus attacks the respiratory system and more seriously, its incubation period is 2 to 14 days. '.

The doctor added, "The virus was tampered with because it can infect the lungs in 5 minutes."

When the doctor in the series was asked if there was a cure for the disease? So he said, "There is currently no cure for this disease".

Further episodes of the series show that children are being instructed to wash their hands while the correct procedure is being explained.

It is to be noted that a book, published 12 years ago, had recently surfaced, which was shockingly predicted that by 2020 there would be a global outbreak. 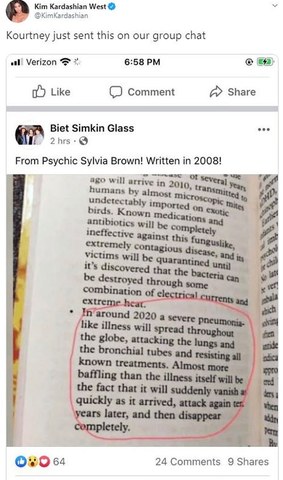 Director Steven Soderbergh's film begins with a woman returning from Hong Kong to Minnesota with a strange disease, dying within a few days, after which her husband and others show the same symptoms. There is an outbreak of epidemic worldwide.

The film shows a glimpse of the worst scenes of how rumors and worries spread and society's lives are badly affected, with scenes of looting and empty airports spilling over the backbone.

Disney's famous movie 'Tangled' was later linked to the Coronavirus.

The woman who kidnapped Rapunzel to the tower wanted to keep her away from her kingdom so that no one could reach her and they knew the name of the kingdom from which Rapunzel was kept away.

The name of this kingdom was 'Corona', yes the woman who was kidnapped by the Republican wanted to keep her away from Corona.

A few days ago, a former bodyguard of the famous pop singer Michael Jackson also claimed that singers wore masks all their lives because they knew that a virus would come into the world that could make people sick. Is.

Be aware that the word Corona is actually derived from the Egyptian language, which means the crown or halo of the head. The virus can be observed only with an electron microscope, in which the virus is shaped like a solar corona (an area around millions of miles around the sun where plasma is scattered all over), which is why this virus is called the corona. given.

Related Posts
Actress Kinza Hashmi's Short Film 'leaked Video' Is Popular as Soon as It Is Released
Pakistan Wants to Make a Joint Film and Drama With Saudi Arabia
The Trailer of ‘Zindagi Tamasha’ has been removed from Youtube before its release
Frozen 2 Animated Film, Released Worldwide on November 22, 2019
Pakistani short film 'Darling', nominated for American Film Award
10 Awesome Movies That Make Your Heart Beat Faster
'Fruit Chaat' a short film based on the unique story of a wheelchair girl
The Rise of the Sky Walker, kicking off at the box office