By the way, most Eastern wedding ceremonies are held in Dhoom Dham, but in recent years it has been seen that people are coming up with new ideas in their weddings, some of which are interesting, though some may surprise the viewers. Are.
Someone is sitting on an elephant at his wedding, while someone is making millions of wedding cards.
But the young man from the Indian city of Bhopal surprised everyone by choosing the place of card plant in his wedding invitation.
According to the Indian Express report, businessman Pranshu Kankin and his brother Pratik have always wanted to have a wedding ceremony that is environmentally friendly.
Pranshu chose plants as invitations to invite guests to his wedding party.
In an interview, Pranshu's brother Pratayk said, "This idea came to us when we started to think of ways in which food is not wasted in marriage, we replaced people with paper cards through e-cards. I started sending invitations and requested that they respond as well.

Wedding E-Card - Photo / Indian Express
"Doing so will reduce the waste of paper as well as food because when people respond to e-cards, it will be estimated how many people are going to be part of the event," he added.
According to Pratik, "The father then understood that the mother did not like this idea. She said, 'How will we meet people if we do not send cards?'
Satisfying the mother's wishes, the brothers later began distributing the cards as wedding invitations instead of cards, which they called 'Green Invite'.
The brothers printed the wedding ceremony date and the name of the bridegroom on the couple.
According to Pratyak, these plants can be kept in the house for 3 to 4 years. 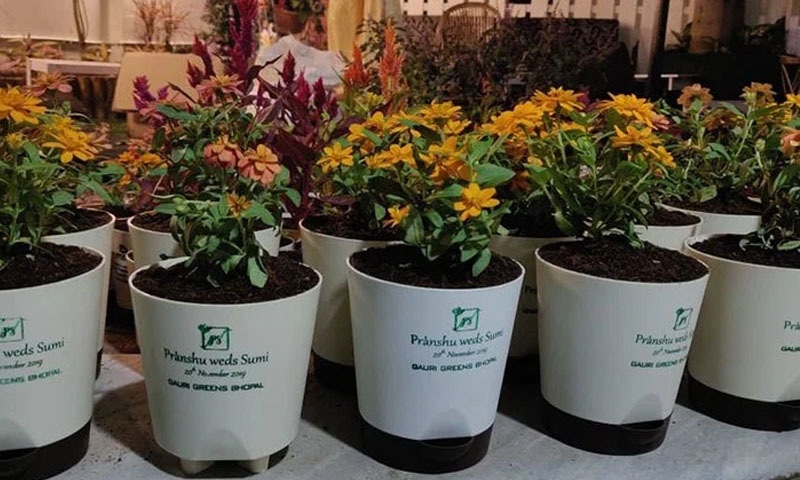 Photo / Indian Express
The mother was not satisfied with her decision, but the guests liked the idea of ​​the brothers.
According to Pratik, "I was not convinced that this decision would get such a positive response from people, people seemed very enthusiastic, we had 4 to 5 types of plants, and everyone wanted to choose the plants of their choice.
He also stated that the price of one of these plants was made close to 68 Indian rupees, which is equal to the amount of one card.
The two brothers also contacted the organization Ruben Hood Army, which distributes clean food left over to poor children, for the sake of minimizing food waste at weddings.
According to Pratik, he spent 10 to 15 minutes with each guest and in the meantime explained to them how the plants can be taken care of.

Selena Gomez's 'Quarantine Cooking Show' for Fans
Related Posts
Kailash's religious festival ends with all colors
Does a floating city become a reality?
Successful skydiving of a 90-year-old man with No legs
How To Do SQUATS FOR BEGINNERS | STEP BY STEP GUIDE
The Young Man Choose the Place of Card Plant in his Wedding Invitation.
TOP FIVE EDUCATION BOARDS IN PAKISTAN
Ultra-processed foods increase the risk of diabetes
GG Hadid and Bella Hadid's Bungalow in Beverly Hills