YouTuber Zaid Ali has asked his fans for prayers for recovery after a horrific traffic accident.

Zaid Ali informed his fans about the accident in his Instagram story on July 26, saying that he suffered severe head injuries and became unconscious.

According to the YouTuber, after the operation, the doctors told him he was lucky that there were no more injuries inside his head and no bleeding.

He wrote that the last few days were the most difficult days of his life and the injury to his head proved to be the most dangerous for him, and he went through the worst pain and suffering.

Zaid Ali mentioned his suffering and said that until now, he is deprived of food and drink, his head is swollen, and he is also suffering a lot of pain. 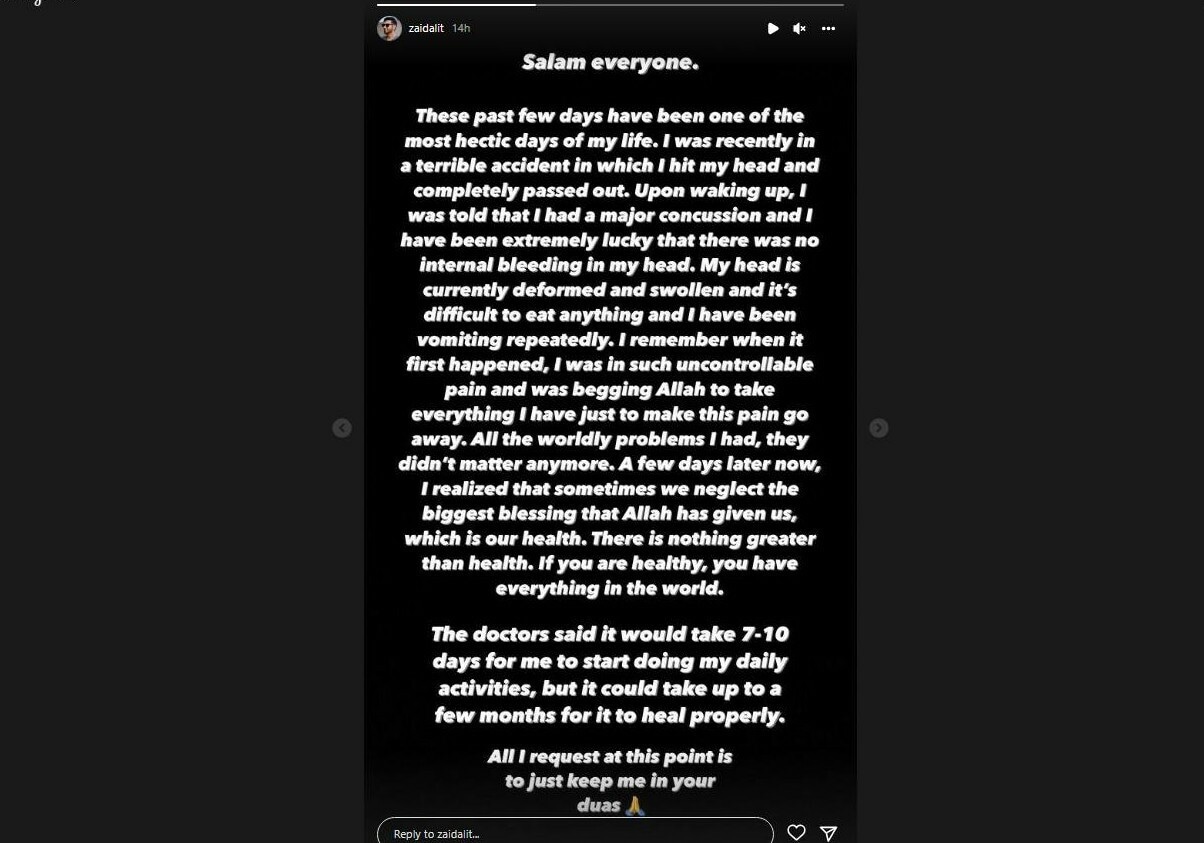 According to the YouTuber, he is still vomiting, and his condition is not much better; but doctors have told him that he will get better in a week, but it may take several months for him to recover fully.

He also admitted that it was only after the traffic accident that he realized a healthy life and how much health is a blessing.

He appealed to his fans to pray for his recovery and wrote that a healthy person has all the world's blessings.

The YouTuber did not write when and how he met with the accident, nor did he specify the location of the accident.

Zaid Ali lives in Canada with his family and visits Pakistan.

He married YouTuber Yumna Ali in August 2017, and the couple had their first son, Izyan Ali Zaid, in August 2021.

Zaid Ali and Yamuna Ali also share personal life-related information in their vlogs on YouTube and are very popular across Pakistan.

Related Posts
Humayun Saeed made fun of the Adnan Siddiqui on instagram
Johnny Depp's Statements Complete in Wife Violence Case
What do you think of nepotism in your industry? Iffat Omar
Jennifer Lopez and Ben Affleck Got Married Again After 20 Years
For God Sake, this is not the time to make fun of anyone or play with emotions, Meera
Did Khalil-ur-Rehman call Eshal Fayyaz a 'second-class woman
Will Bilawal and Maryam Nawaz Become Our Leaders? Amina Ilyas
What are Shamoon Abbasi and Sanam Saeed doing in Thailand?