In a social media post, a woman named Parveen advised people to learn English to communicate with other regions and people of the world, and learning English is not rocket science.

The woman said that Urdu is our own language, however, there should be no problem in learning English, and learning it is not rocket science.

However, actor Yasir Hussain did not like the woman's suggestion and wrote to her, "Parveen Baji, learn to love your language." 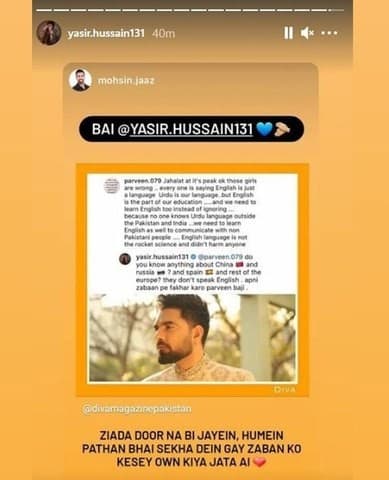 Although the woman did not say whether she would love her language or not, Yasir Hussain asked her if she knew anything about China, Russia, Spain, and other European countries. At the same time, the actor wrote that yes people do not speak English. Addressing the woman, Yasir Hussain wrote, "Parveen Baji, love your language." At the same time, the actor wrote in the post that we should not go too far but only the Pathan brothers will teach us, how do we adapt our language and what is its importance?

It may be recalled that the woman had earlier last week ridiculed the restaurant manager for not being able to speak English by the female owners of the Canoli Bay Cafe Civil restaurant in the capital Islamabad. A campaign against women was also launched on social media.

A campaign was also launched against the female owners and their restaurant for reprimanding the male manager for not speaking English, after which the restaurant not only displayed its logo in Urdu but also apologized for the behavior of the female owners. ۔

Related Posts
There is hardly anyone in Pakistan who takes this position after two children
Thank God for Giving Me New Life, Humaima Malik
Jibran Nasir and Manasha Pasha's engagement
Urdu language is the cause of disputes and differences among Muslims?
Offer to host Ramadan transmission to Tik Tok star Hareem Shah
If you want to enjoy cold nights, go here
The lights shone on the Mizar e Quaid
Marwa's Father: We Were Called to Come to the Morning Show