India's famous comedian Rajushree Vastu passed away on September 21 last month, after being ill for some time.

Pakistani actor Yasir Hussain slammed his showbiz personalities and TV channels for not remembering legendary comedians Umar Sharif and Amanullah on their death anniversary after Indian comedian Kapil Sharma paid tribute in the program. He complained that we do not give our legendary figures the place they should be.

Yasir Hussain shared a photo of The Kapil Sharma Show on his Instagram story and complained that no TV channel in Pakistan had given such a tribute to comedians like Umar Sharif and Amanullah.

He wished that the Pakistani showbiz industry should also pay tribute to the late comedy legend Umar Sharif and Amanullah in the same way Raju Shri Vastu was paid. 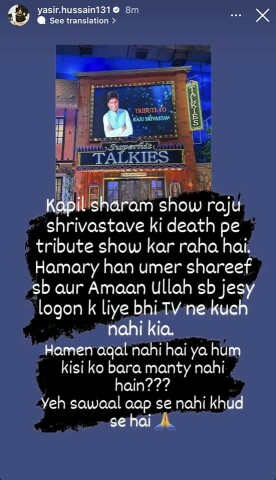 The Badshada Begum actor wrote in his Instagram story that 'The Kapil Sharma Show is paying tribute to Raju Shrivastava, and nothing like that has been done here for Umar Sharif and Amanullah.

Do we lack common sense, or do we not respect our seniors? He also clarified that he is asking this question to himself and not to his followers.

It should also be clear that the special episode of The Kapil Sharma Show aired last weekend in which all the comedians paid tribute to Raju Srivastava; Jay Vijay Sachin also shared pictures of this special program. It should be noted that comedy king Umar Sharif died last year after a long illness, while Amanullah lost his life due to ill health at the age of seventy in Lahore.