Social media users have expressed sympathy with WWE's wrestling star The Undertaker for his decision not to return to the ring. The 52-year-old wrestler, whose real name is Mark William Calaway, said in a recent documentary that he now has "nothing left to win."

It looks like he's going to retire after 30 years in the wrestling ring. But the Undertaker and the WWE have not yet officially announced this. Called Deadman, Calaway has said a lot in his video biography. He also talked about his recent match with AJ Styles. In this match, he was seen riding his motorcycle after burying AJ Styles. He says it was the best way to end his career and that such opportunities do not come again and again.

“The time has come for this cowboy to finally leave,” he said. “I can do what I can't do in the ring by staying out of the Ring. And I have come to the point where I understand that.”

He said he would consider returning for a final match but would make the final decision in time. Calaway has won the World Heavyweight Championship several times. He has also been a six-time winner of the Royal Rumble and the four-man tag team. His career began in 1984 with a wrestling company called World Class Championships. He joined the WWE in 1990, where he became part of Ted Debbie's million-dollar team.

Calaway is considered one of the founders of WWE Wrestling. He was involved in the first casket match and the first Survivor Series in 1992, as well as in the 1996 match between Barry Alive and Hale in 1997. Despite gaining a lot of fame, he did not turn to Hollywood like his contemporaries Da Rock and John Cena. Speaking to the BBC last month, he said he had many opportunities to do so but did not. They say it's not for them.

"Wrestling is my passion. This is where I work hard with my heart and mind." In a tweet on Sunday, he shared a link to his documentary, saying, "You don't value this path until you get to the end of it." 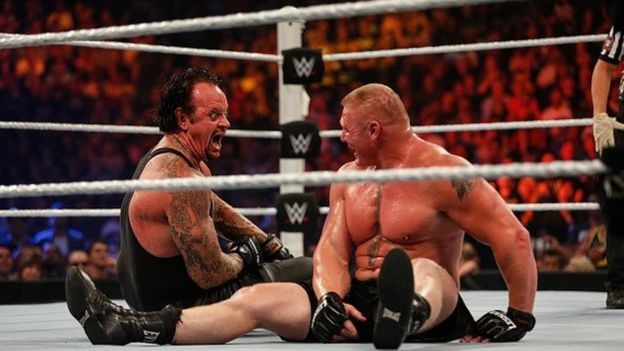 Many people expressed sympathy for Undertaker on social media. And the hashtag U The Taker started trending. Wrestler AJ Styles said it was a matter of pride for him that the Undertaker's last match was with him. Announcing the arrival of the players in the ring, the announcer Mike Room thanked them and said that he was grateful to them for making their childhood so happy.

There was a lot of news circulating about Undertaker's retirement. After losing a match to a Roman Reigns in 2017, he left his famous gloves, hat and trench coat in the middle of the ring and went backstage.

The English Cricket Board's chairman apologized for the team's refusal to visit Pakistan.

The government has stopped the release of 'Zindagi Tamasha'