Thousands of women took to the streets in South American country Argentina to legalize 'abortion'.

For the past three years in Argentina, 'feminists' and women's rights organizations have campaigned to legalize 'abortion'.

The campaign to legalize abortion was at its peak in 2018 and at that time a proposed bill was also presented to the government by women's rights organizations.

The proposed bill, which was granted to the government, had legalized 12-week contraception, but the bill was rejected by Argentina's parliament.

While the campaign to legalize abortion in Argentina was at its peak, the country's leading politician and then President Alberto Fernandez was also present.

However, after she became president of the country in the December 2019 elections, she backed down the issue of legalizing abortion, after which women again took to the streets. 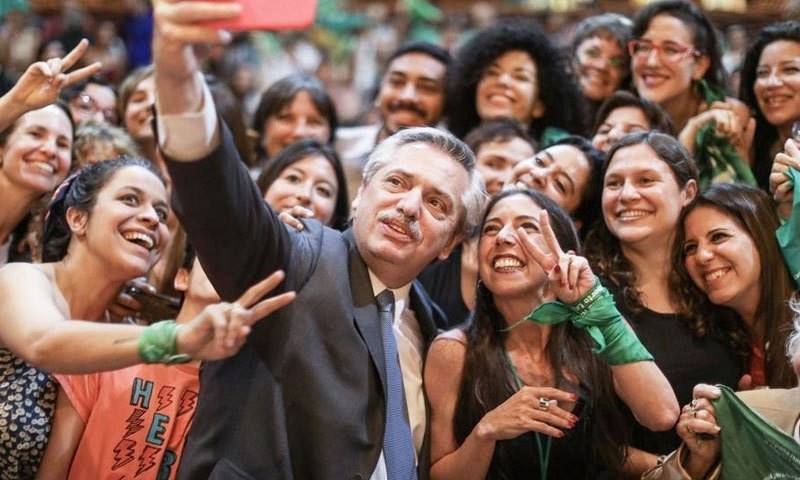 Alberto, who became president of the country in December 2019, has been participating in women's protests in the past - Photo: AFP
According to French news agency AFP, thousands of women have gathered in Buenos Aires to legalize abortions and are also being called the biggest demonstration.

Women on the streets wore green scarves to legalize abortion, while women also picked up play cards in order not to allow abortion.

A psychiatrist who participated in the demonstration described AFP as an "abusive pregnancy", speaking to AFP, saying that women should be allowed to get pregnant.

The women who participated in the demonstration also brought young girls with them, with dozens of women 5 years old or younger.

Likewise, many women participated in the demonstration with their adolescent and adolescent girls and said they wanted a secure future for their children, so they demanded that abortion be legalized.

In its report, Al Jazeera, the Arab broadcaster, reported that Catholic Christians are in fact the biggest obstacle to legalizing abortion in Argentina, and they do not want this process to be legalized.

The report said that where women have announced protests in more than 80 cities by March 8 to increase pressure on the government to legalize abortion.

There, religious leaders of the Catholic community have also convened important meetings over the next month, including World Women's Day, to ban abortion.

Religious leaders of Christian Catholics say that no human being, whatever created, has the right to come into the world and lead a secure life, no one can take away from them the right to live life.

It should be noted that Argentina is also counted in countries of the world where there are many illegal abortions, and abortion abuses are common in Latin America, including South America and North America.

Last year, a report by the Argentine government said that there are an estimated 2.5 million illegal abortions in the country every year, but human rights organizations believe that the number of illegal abortions is up to 5 million. 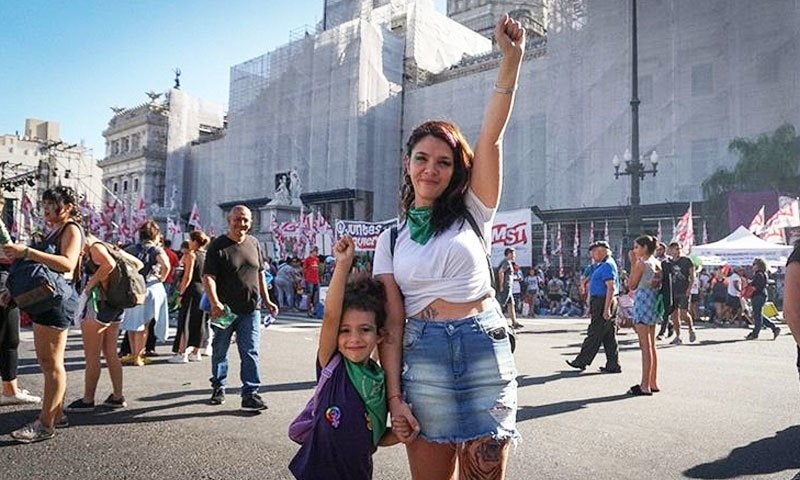 Women bring their young girls to the protest too - Photo: Al Jazeera

Related Posts
Designer of HSY, Hassan Sheheryar Yasin Ready for Acting in Drama
The selfie of Mahira Khan went viral on social media
I am with you today and not too: Irrfan Khan's Last Message on Twitter for fans
Legendary Comedian Latif Munna Has Passed Away
Armeena Khan Married quietly on Valentine's Day
Amna Ilyas Once Again Criticizes Whitening Creams
When the marriage with Salma Agha ended, Neeli had given her support, Javed Sheikh
Zoya Nasir angry at critic 'Amaa ji' for using inappropriate words in comments