Renowned Pakistani actor Humayun Saeed announced that after the success of his play 'Mere Pas Tum Ho', he will be seen working with child star Shees Gul in another play.

Reports were circulating that Humayun Saeed and Shees Gul would be seen working together soon after the success of their play and now Humayun Saeed himself has confirmed the news. 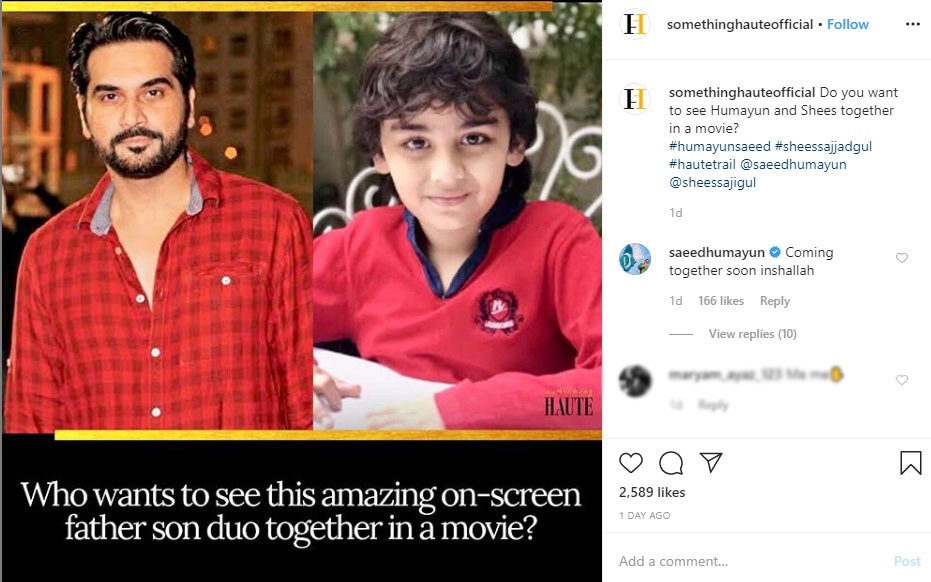 Photo: Screenshot
In this post, he also shared photos of Humayun Saeed and Shees Gul.

Later on, Humayun Saeed himself announced through a comment that we will see him working again soon.

However, the actor did not say in his comment that he would be seen working in a play with Shees Gul or this time the two are doing a movie together.

The two actors - Ayeza Khan, Hira Mani and Adnan Siddiqui - were also present in the play.

It is to be noted that the acting of Sheet Gul has appreciated as much as the rest of the main characters in the play.

The story of the play was written by Khalil-ur-Rehman Qamar, while instructions were given by Nadeem Baig.

It is to be noted that the play showed that Mehwish (Ayeza Khan) is a married woman of a poor family who betrayed her husband (Humayun Saeed) for the money and divorced her rich man 'Shawar' (Adnan).  and want to marry them.

Before the marriage of the two, the rich man Shahwar's first wife Mahama (Swaira Nadeem) returns from the United States and, despite disrespecting Mehwish, sends her rich husband to jail.

The story of the drama was criticized by various circles, but the interesting thing is that despite the criticism, the drama was seen a lot and there was some debate on social media.

The release of the film 'Tich Button', which has been delayed many times

How much did Jennifer Lopez and Shakira pay for 'Super Bowl' performances?

Food Prices Reach the Highest level in the Country