Actress Esra bilgiç, who played the role of Halima Khatun in the Turkish drama Ertugrul Ghazi, was criticized by Pakistanis a few days ago as a result of a photo, but now everyone is showering their love on her.

In August, Priyanka Chopra slammed a Pakistani-born woman for questioning a controversial statement on ongoing tensions between Pakistan and India, which drew criticism.

Priyanka Chopra tweeted during a time when we were this 👌🏽 close to sending nukes to one another. Instead of advocating for peace she tweeted in support of the Indian army pic.twitter.com/LhbMkOW59v

During the ceremony in Los Angeles, Ayesha Malik, a Pakistani-American woman, asks the actress about a tweet made in February this year, on which the actress gets angry at her.

Ayesha Malik asked the actress if she supported the Indian Army through a tweet in February this year and allegedly wanted a nuclear war between the two countries.

Continuing her question, the Pakistani-born woman told the actress that she was the UNICEF's Goodwill Ambassador and did not like to talk about the war. And then she has millions of fans in Pakistan, who are angry at her desire for war in both countries.

It can be seen in the video that Ayesha Malik's question was not over when one of the organizers of the event snatched the mic from her and at the same time Priyanka Chopra scolded a woman of Pakistani origin.

Instead of answering Ayesha Malik correctly, Priyanka Chopra accused her of being arbitrary, she could have done it easily, and the actress said that she had listened to his question.

In another video, Priyanka Chopra is seen answering a question of a Pakistani girl, but instead of answering Ayesha Malik's question directly, she is seen talking irrelevantly.

In this regard, the Turkish actress who played the role of Halima in Ertugrul had made a comment on an Instagram post of Priyanka Chopra in August 2019 which has now gone viral in Pakistan again.

Priyanka Chopra shared a photo of herself, Sufi Turner and Danielle Jonas on Instagram, to which Ertugrul's actress commented, "Being a patriot does not mean you encourage war, being a goodwill ambassador for the United Nations." You should not be part of a conversation that is about war, it can affect many children who consider you a role model.

The Turkish actress also spoke about the treatment meted out to Ayesha Malik. "You disrespected a woman who questioned a statement you shared on your Twitter account with millions of people. 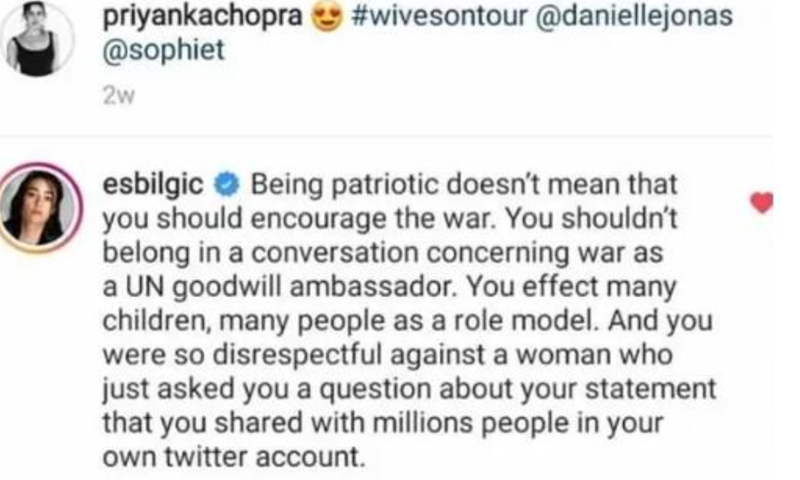 Now, Pakistani users are appreciating the Turkish actress's comment on Priyanka Chopra's post and are praising her statement by tagging her in various comments.

Recently, a photo shared on Isra Belgium's Instagram in March was criticized by Pakistani fans for her dress.

But now speaking out in support of a Pakistani-born woman on the post of Bollywood actress has taken root in their hearts.

How to use WhatsApp on Computer?

Trip to Walled City of Lahore

Related Posts
Aijaz Aslam Faces Criticism for Sharing Old Video With Ahmad Shah
Sofia, a Swedish princess, works in a hospital for patients with coronavirus
Boxer Amir Khan and Faryal Makhdoom Will Soon Be Seen in a TV Series
Once Again, Rumors of Shraddha Kapoor's Marriage
Ushna Shah and Imran Abbas Shocked by the News of Their Marriage
Madiha Rizvi Had Planned to Run Away After Marriage on Her Wedding Night
saheefa jabbar khattak From Uniformity in Dramas and Displeases With Anti-woman Themes
Ushna Shah Recovers From Corona in 9 Days