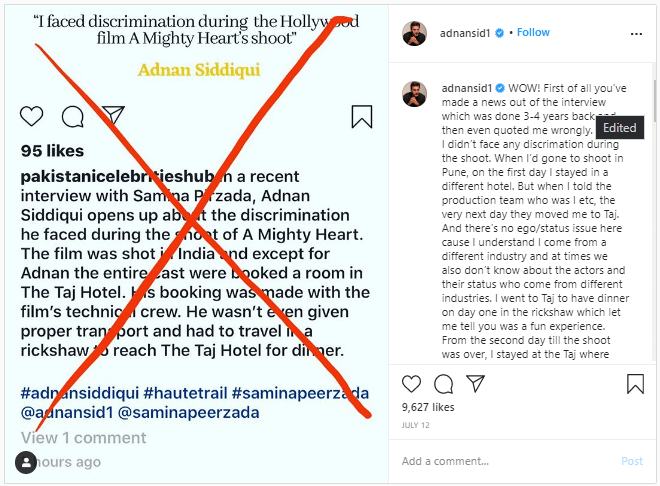 There were other similar claims in the news and it was said that all these things were said by Adnan Siddiqui in an interview. After the news went viral, Adnan Siddiqui shared a screenshot of it on social media, calling the news wrong and expressing his anger over it. Adnan Siddiqui said that fabricated information was spread about him, he did not say such things in the old interview nor was he mistreated during the shooting of 'A Mighty Heart'.

He also criticized the management of the social media page of the news showbiz for running false news. However, he now shared a photo taken during the shooting of 'A Mighty Heart' which went viral as soon as he saw it. Adnan Siddiqui shared a photo taken on his Instagram with Angelina Jolie during the shooting of the film in 2006 and said that the photo is of a scene from the film.

In the picture, Angelina Jolie can be seen walking ahead of Adnan Siddiqui under the feeling of fatigue while Pakistani actors are walking enthusiastically behind the Hollywood actress. In the film, Pakistani-born British actor Ali Khan played the role of Sheikh Omar, actor Bilal Saeed played the role of the then Interior Minister of Pakistan Moinuddin Haider.

Although the film was nominated for several awards, the film failed to win any major awards. Instead of being shown as a journalist, the film was made in a sensational way. The film was shot in India and France and was criticized for misrepresenting Pakistani society in the film.