Veena Malik, an actress and host, says she sympathises with the Taliban administration for banning artists in Afghanistan or forcing women to work in other showbiz businesses around the world in very short gowns instead of males.

Veena Malik stated in an interview with Deutsche Welle (DW) Urdu that the Taliban did not invade Afghanistan, but rather that it was their own country and that they had built a government there. According to the actress and host, Afghanistan also belongs to the Taliban, who struggled for 20 years to gain control of the country and do not believe the Afghan people are unhappy with the Taliban's commands.

"If the Taliban come to control and impose any laws and regulations, the people there will willingly accept them," he claimed, adding that "there is still no resistance to the Taliban's commands." In response to a question, she stated that the photographs of her wearing a burqa on social media were not forced upon her, but that she has been covering herself as she wishes since childhood.

When asked about the Taliban's prohibition on the showbiz sector in Afghanistan and the introduction of full burqas for women, Malik remarked that instead of women wearing Afghan veils, they were moved to other nations. Short-dressed ladies are frowned upon in the entertainment sector.

Women are obliged to wear semi-nude garments in the showbiz sectors of many countries around the world, according to Veena Malik, and many feel uncomfortable in short dresses. He also voiced sympathy for such showbiz women, saying that rather than prohibiting the industry in Afghanistan, he was concerned about other countries' industries, where actors are free to do anything they want, which is highly dangerous. Is.

In response to a question on the 'dress code' in showbiz, Veena Malik stated that she believes the Pakistani government should implement a 'dress code' for showbiz. According to him, every issue in life has a limit beyond which everyone must stop; similarly, a limit should be set on the subject of dress in entertainment, and it should be stated how the dress can be worn.

The government should impose a dress code for the entertainment industry in the country. Instagram snapshot of actress
When asked about the differences in women's dress in Pakistan and Afghanistan, she explained that Pakistan is an autonomous country where ladies wear whatever they choose.

During the interview, she also discussed her political and social comedy show, which will appear on Urdu Flex shortly, and stated that she will be seen on the show for the first time in 13 years. He revealed that the show will be similar to the previous show 'Hum Sab Umeed Se Hai,' but that it will now air on 'Urdu Flex,' and that Dr. Younis Butt will also write the screenplay for the new show.

He didn't say how long his show would be on the air or who else would be on it with him, including actors and hosts. Veena Malik's return to entertainment was announced earlier this month, and the actress revealed in an interview with Dawn Images that she would be acting in an Urdu Flex web series, but she has now stated that she will not be on the web. In the show, not in the series. 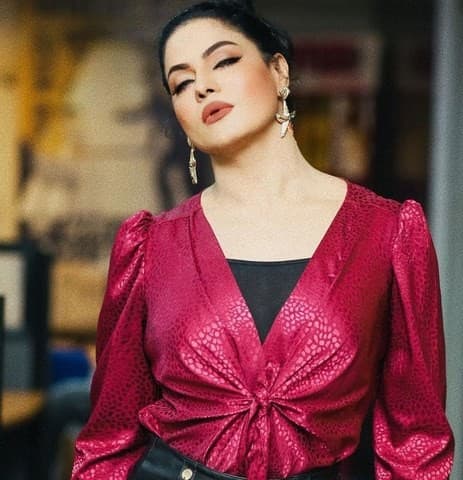 Veena Malik will return to the television through the show after a seven-year absence. She did not appear on screen after 2014, but she did appear as a guest and co-host on other programmes. From 2002 through 2014, Veena Malik worked as an actress. Not just in Pakistani films and dramas, but also in various Indian films and dramas, she demonstrated the spirit of acting. Veena Malik's most recent television appearance was in the 2016 comedy 'Fun Night,' following which she starred in a variety of political and comic shows. She has also been in various Bollywood films and starred in India's most controversial reality show, 'Bigg Boss.'

Veena Malik married Asad Khattak in 2013, after which she took a break from the spotlight for a while, however the couple split in 2017. The actress has two children who are currently residing in Pakistan, and she is currently involved in a legal struggle with her ex-husband over child custody.

Samsung has quietly introduced another Galaxy A series phone Galaxy A41