Several showbiz personalities have reacted to singer Abdullah Qureshi's decision to quit music in the name of Islam, saying that he should not label others as 'accused' or 'sinners'.

Abdullah Qureshi announced a few days ago that he would quit music for the sake of Islam.

He had said that now he will neither do music concerts nor appear in advertisements, but he will continue to do projects of his choice on social media.

Abdullah Qureshi made it clear in an Instagram post that he is leaving music purely for the sake of the religion of Islam and God's will.

Many showbiz and music personalities expressed their views on his bidding farewell to music for the sake of Islam. However, they expressed their best wishes for him, but at the same time told him that by declaring music as 'haram'. Don't make other people 'guilty'.

On his decision, Hamza Ali Abbasi wrote in his tweet that as far as his demand is concerned, music is not completely forbidden in the religion of Islam. He also suggested Abdullah Qureshi watch some YouTube videos.

Like him, singer Natasha Baig also expressed her views on Abdullah Qureshi's decision to quit music and wrote that anyone could justify themselves in the name of 'awakening' and everyone else as 'accused' or 'wrong'. No right to present.

May God give u the strength & persistence in ur iman, ikhlaaq & deeds brother. Just want to share my discovery that Music is not completely haraam in Islam. If u have time, please watch this 1 program https://t.co/6CTgthWgKe OR this detailed 10 part series https://t.co/PhkHWmLSUc pic.twitter.com/15rtmBcBWE

Without mentioning the singer's name, he said that whatever journey a person has chosen is his own choice, but he should not encourage others to misunderstand his journey.

The singer wrote that sin is related to the human soul and forbidden in every religion.

Like him, model and actress Anusha Ashraf also expressed her views on Abdullah Qureshi's decision. They wrote in a long post that there could be a debate about the prohibition of music in religion and the debate is still ongoing, but people disagree on some decisions.

2/2 Your act might be something which Islam never appreciates but music is divine and it has nothing to do with any sinful act unless you are unable to control your nafs and nafs can become a problem in any profession.

He wrote that generally, people say that a person is either a conservative or a liberal, but why don't people think that one can also take a moderate attitude?

He wrote that a person should use his senses while making a decision and should not make a decision based on what others say; if music is forbidden to someone all the time, then it may be forbidden for him. If that's a relief to anyone, leave it at that. 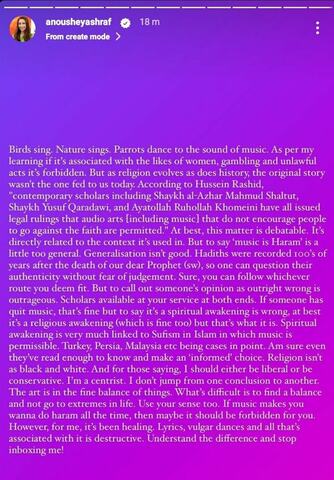