The nomination of certain actors for the Lux Style Awards has been challenged by celebrities.

In the music, fashion, and television categories, the Lux Style Awards 2021 nominees were just released, shortlisting a number of dramas, models, actors, and singers. However, several of these dramas were not nominated in any category, and some of the dramas' actors were not nominated. 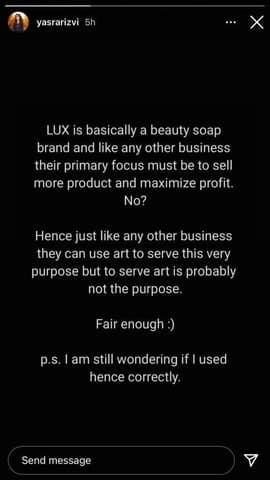 Sonya Hussyn is enraged at the nominations for the Lux Style Awards. In a tale uploaded on her Instagram account, actress Yasira Rizvi slammed the Lux Style Awards. "Lux is essentially a beauty soup brand, and like any other business, their main goal is to sell more items and make a profit, right?" He made a remark.

Yasira Rizvi went on to say that, like other businesses, they can use art for their own purposes, but that serving art isn't necessarily their goal. On the other hand, actor Ali Abbas answered to a fan's inquiry concerning the Lux Style Award. 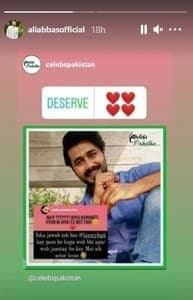 In an Instagram storey, a fan questioned Ali Abbas, "Why haven't you been nominated yet? It's a travesty. "The answer will only be with the Lux Style Awards, even if they know that I am an actor," the actor responded.

So here I am.. extremely overwhelmed.. thanking each and everyone of you.. for making me feel like a Winner. A winner who doesn’t need no stage.. nor ceremony.. cause You guys.. ahh guys! #AbRulayengeKiya? #MyAwardisRightHere
❤️ https://t.co/M8uXidtq2S

"For me, the fight, love, and support I've witnessed in the previous 24 hours is more than a trophy. I'm not sure what it is if it's not a triumph "Kubra Khan remarked. He declared himself a winner without the need for a podium or a ceremony.

Hadiqa Kiani, a well-known singer and actress who made her acting debut with 'Raqib Se,' did not condemn the fact that her play was not recognised, but expressed hope that she will be nominated next year. "I've had a lot of love and support from Sakina and Raqib," Kayani stated, "but one thing needs to be cleared." 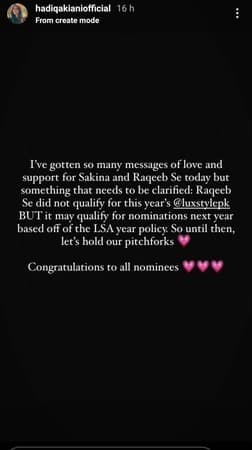 Sonya Hussyn had previously voiced her disappointment in Instagram stories when her popular drama 'Sarab' failed to receive a single nomination for the Oscars. Sonya Hussyn expressed her displeasure in her narrative by writing that she was disappointed that a drama like "Mirage" did not receive a single nomination for the award.

This isn't the first time that celebrities have slammed the nominations for the Lux Style Awards.

Bollywood: the Movie Stars Who Ended Their Lives With Their Own Hands

Related Posts
There is no need to go to the movies after the reception on the small screen, Iqra Aziz
Showbiz Figures Oppose Possible Ban on YouTube in the Country
Yasir Hussain Killer and Ayesha Omar Ready to Become Police Officers
Application Submitted in Court for Lifetime Ban on 'Zindagi Tamasha'
After being kidnapped, imprisoned, drugged and got Raped: Aimee Anne Duffy
PTA is taking action against who share Rabi Pirzada's viral Video
Indian citizen at the forefront of viewing pornographic content on smartphones
Why are Saudi women telling stories of harassment in times of outbreak?