Recently married Shahroz Sabzwari and Sadaf Kanwal will soon be seen together on the TV screen in the Eid telefilm 'Ghar Ke Na Ghaat Ke'. The story of this telefilm produced by TNI for the drama channel ARY Digital revolves around two sisters, Sadaf and Arousa, who are married to Shahroz Sabzwari and Hassan Ahmed respectively. 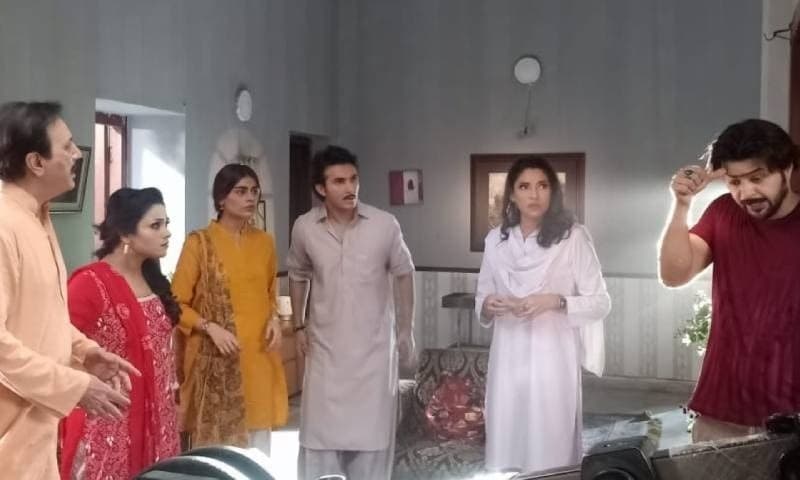 Both the boys are financially dependent on their father-in-law who has bought a shop for both the sons-in-law. In this telefilm, Javed Sheikh is playing the role of Shahrooz's father-in-law. The telefilm also includes Zalmai Sarhadi, who will play the role of a nurse. Speaking to Images, Sadaf Kanwal revealed that the comfort level between the couple on the set was 'very good'.

Shahroz Sabzwari also spoke about his experience working with Sadaf Kanwal. "I love working with her, we're working together for the second time," he said. "The first time we worked together in Oslo, I must say that she is a completely professional actress," the actor said.

Shahroz Sabzwari said that we come together but as soon as we enter the set, the professionalism that we bring to the set makes it easier for everyone. "We do the work like work, enjoy it and after packing up we see each other and talk about what's going on at home," he added.

The showbiz couple believes that working together will make the audience happy because they are both playing unconventional roles that they have never played before. Shahroz Sabzwari said that this is a good opportunity to become what we are not, we laugh a lot on the set together, Javed uncle also like Sadaf very much so it is easy for us.

It may be recalled that Shahroz Sabzwari had married Sadaf Kanwal on May 31, two months after confirming his divorce from his first wife Saira Shahrooz. Rumors about their relationship had been circulating for the past six months before their marriage to Sadaf Kanwal, which began in December last year when news broke of the separation between Shahroz Sabzwari and his first wife Syra Yousuf.

It may be recalled that Shahroz Sabzwari was married to Saira Shahrooz in 2012 and they also have a 6-year-old daughter, Noor.