Amid rumors of divorce of famous showbiz couple Ahad Raza Mir and Sajjal Ali, their fans were looking happy when their advertisement came out.

There have been rumors of separation and divorce between the two for the past few months, which they have not yet clarified or denied.

The two have not been seen together for at least four months, nor have they shared any photos or videos on social media, which has led to a flurry of disagreements between them.

Ahad Raza Mir also did not attend the recent wedding of Sajjal Ali's sister Saboor Ali, after which the rumors of divorce between them intensified.

A few days ago, after the rumors of divorce, Sajjal Ali shared an old selfie with Ahad Raza Mir in his Instagram story and immediately deleted it, making his fans even more upset.

But now their fans are happy to see the two together in an advertisement and mention each other in an Instagram post. 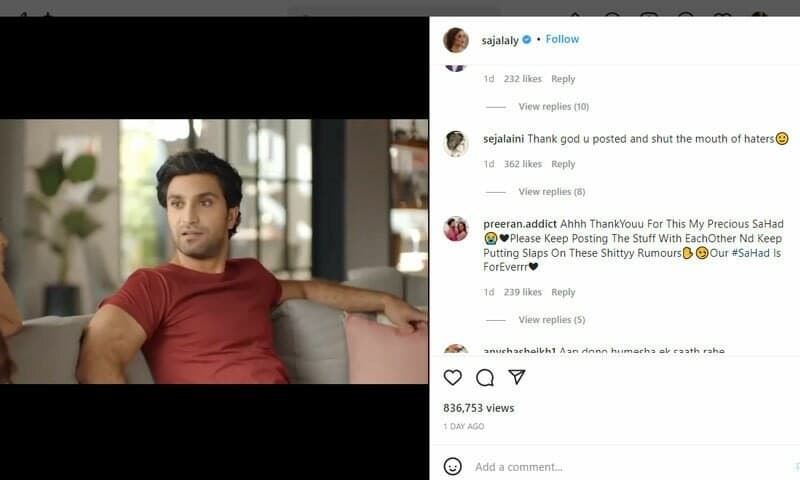 According to fans of both, since Sajjal Ali and Ahad Raza Mir worked together in the advertisement and both mentioned the ad and mentioned each other, which proves that there are no differences between them.

Fans happily commented on the foam ad shared by Ahad Raza Mir and Sajjal Ali, saying that both look good together and they should keep sharing such content on social media.

Fans also wished him success in his personal life after seeing him in the advertisement together and wrote that those who spread rumors of divorce of Sajjal and Ahad would have got the answer. 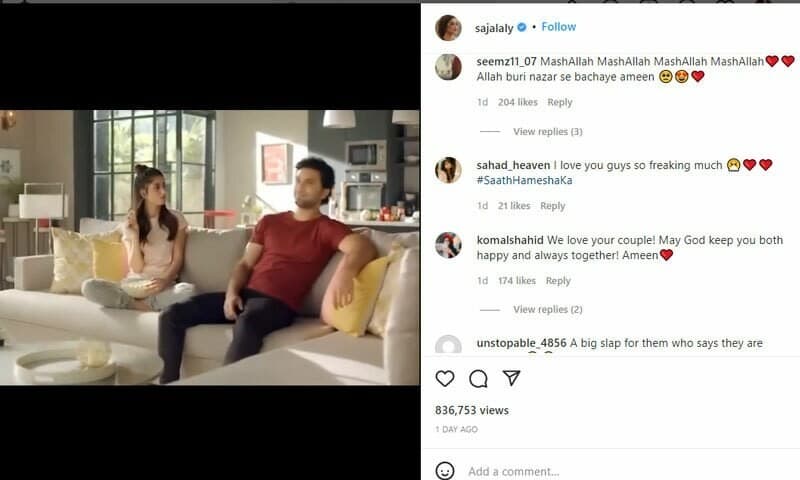 Although the two were seen together in an advertisement and mentioned each other on Instagram, the two never shared a personal post or photo for each other.

The couple did not elaborate on the rumors of divorce and separation, but their fans call their advertisement the only explanation.

The couple got married in March 2020; their pair has been very popular in real life, including the screen.

Related Posts
Meghan Markle Named the World's Most Impressive Style Icon 2019
The waterfall started flowing UPSIDE DOWN: the video went viral
Numerous Pakistani Girls Offer Marriage, 'Turgat'
Ayesha Omar's Explanation on Allegations of Marriage to Shoaib Malik
How was the actor Feroz Khan when he was a child?
The statue of "Ertugrul Ghazi" erected in Turkey has been removed
Anoushey Ashraf Disagrees With Maria B on Shooting of Indian Designer
Usman Mukhtar Also Tied the Knot