Model and actress Saheefa Jabbar Khattak has clarified that there is no conflict between them after rumors of separation and divorce from her husband went viral on social media.

Saheefa Jabbar Khattak clarified in her Instagram stories that there are no differences between her and her husband, Khawaja Khizer Hussain; they are away from each other due to their projects and work.

The actress said her husband is in Canada to complete his higher education and has the best classmates to handle his worries. 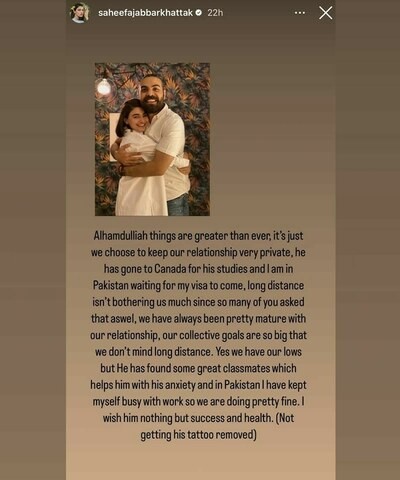 Saheefa Jabbar Khattak said she is also waiting for her visa to go to Canada, but she is busy with showbiz work to keep herself busy.

She clarified in the story that people should not worry about her married life; her life is better and calmer.

In another story, she said that recently, when she shared a video of her removing a tattoo on her falcon, her fans thought that she might be divorced, which is why she is removing the tattoo.

She wrote that there is nothing like that; she and her husband have a better relationship than before, and their life is going smoothly, but they are away from each other to achieve their goals.

She also clarified that people should rest assured she is not removing the tattoo on her husband's face.

It should be noted that Saheefa Jabbar Khattak got married to her longtime friend Khawaja Khizer Hussain on 6th December 2017. After almost 3 years of marriage, she had a wedding photo shoot.

An epidemic like Corona was also predicted in the Indian show 'CID'?

Shoaib and Sania Mirza's Show Announced Amid Reports of Separation

When It Came to Showbiz, Women Were Harassed in the Industry, Said Anusha Ashraf

How did singer Adele lose so much weight in a few months?