The actress's mobile hack was reported by her manager Mashal Cheema on Instagram.

According to Mashal Cheema, he received several calls from Saba Qamar's numbers, while someone unknown to her spoke on the phone.

Mashal added, "I received about 10 calls from Saba Qamar's phones. On the call, this ignorant person asked me if I was talking."

According to Mashal Cheema, “The man said that he got Saba Qamar's phone from a park and when asked how he used the phone, the person told her that when he got the phone, he was not locked,
When asked where he was at this time, he kept asking the same question whether it was Saba Qamar's number on which I got angry, after which the person drop the call. 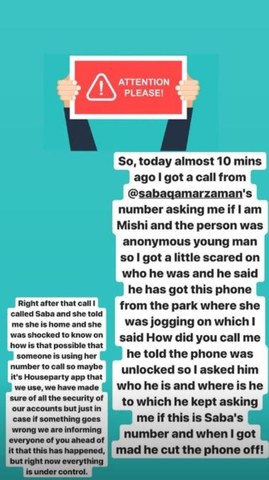 She also mentioned that during that time Saba Qamar was in her house and she was very surprised at how someone was using her phone.

According to Mashal Cheema, the number of Saba Qamar was hacked by a house party app, and the use of this app during lockdown is on the rise.

The waterfall started flowing UPSIDE DOWN: the video went viral

Sofia, a Swedish princess, works in a hospital for patients with coronavirus