Responding to a fan who expressed her desire to get married in Zaid-ul-Omari, Saba Qamar said she did not like the phrase "acceptable." The showbiz Instagram page shared a screenshot of YouTuber Rafi Mahmood's questions and answers, in which a man from YouTube expressed his desire to marry Saba Qamar in his old age.

YouTuber Rafi Mehmood recently answered questions from fans on Instagram, but instead of asking him a question, a fan expressed his desire. The unidentified man told Rafi Mahmood that he would like to marry actress Saba Qamar at the age of 50, but the problem is that he has no acquaintance in the showbiz industry.

At the same time, the man told YouTuber that he was not joking about his marriage to Saba Qamar, but he was very serious about it.

Responding to the said person, YouTuber Rafi Mahmood also mentioned actress Saba Qamar. Mentioning Saba Qamar, calling her Mahalakshmi, YouTuber suggested the actress think seriously about her marriage proposal this time and make a decision. Rafi Mahmood further wrote that Saba Qamar had been offered another marriage, and she should seriously consider the offer. 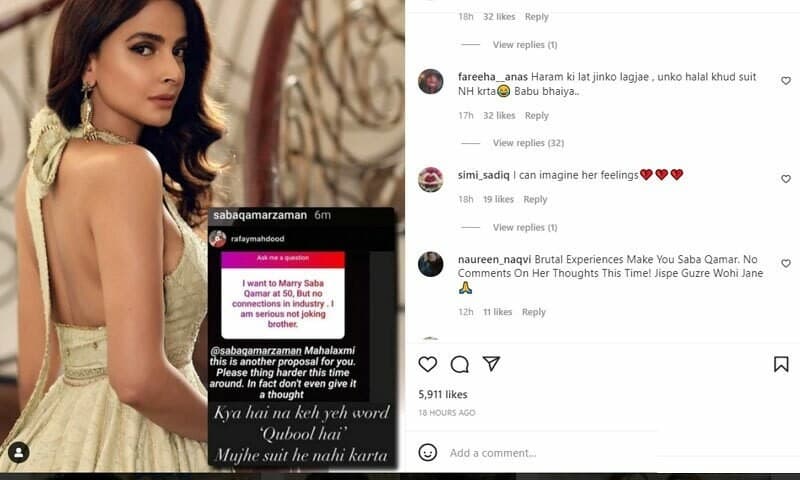 Saba Qamar gave a short reply to the fan's request and YouTuber's response that she doesn't like the word 'acceptable. The actress shared a screenshot of her response to YouTube and fans on her Instagram story, later shared on the showbiz page. The response given by Saba Qamar to the fan offering marriage was also met with outrage, and many people criticized the actress while commenting on the showbiz Instagram page.

Fans were furious at Saba Qamar's dislike of the word "acceptable" and said, "What does the actress care about honor?"