Videos and photos of the famous Pakistani showbiz industry duo Hamza Ali Abbasi and Naimal Khawar Khan continue to go viral on social media, as well as the two sharing beautiful photos with their fans. 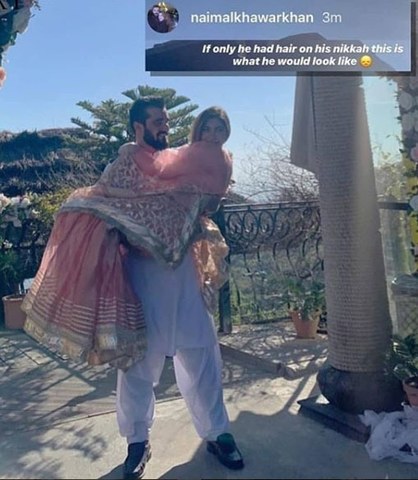 In this photo, Hamza Ali Abbasi Takes his wife in arms.

But on social media, where people found this picture romance of the two, fans were even more excited to see this picture because of a comment made by Naimal Khawar Khan.

Naimal Khawar Khan wrote on the photo that 'If they had hair on the wedding, it would certainly look like this'.

It may be recalled that Naimal Khawar Khan and Hamza Ali Abbasi got married on August 25 last year. 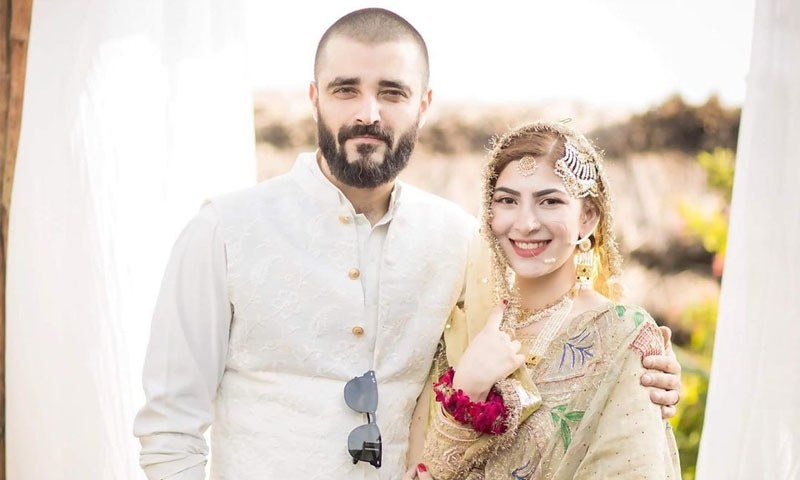 When the actor announced his marriage last year, he even wrote in a message to Naimal that he respects her immensely because he is going to marry a 'bald' man.

These romantic photos of Hamza Ali Abbasi and Naimal Khawar Khan were taken at the wedding ceremony of Naimal's sister.

Hamza Ali Abbasi also shared some photos taken on the occasion on his social media account.

It should be noted that both Hamza Ali Abbasi and Naimal Khawar Khan have said goodbyes to the showbiz, yet they are still very popular among the fans.

Due to the mysterious Chinese flu, the Coronavirus can spread to the world

Related Posts
What does Rumi Of “Mere Pas Tum Ho” want to be in the future?
I Have No Intention of Getting Married, Charlize Theron
A talk With Italian architect trapped in Lahore due to coronavirus
Are you also downloading the wrong 'Ertugrul Ghazi'? All memes of Drama Ertugrul Ghazi
Sana Khan and Mufti Anas will get divorced in next 3 years, KRK predicts
YouTube Star Shahveer Jafry Got Engaged
India: The secret of the girl who planned her own 'gang rape' as a boy, was revealed
A glimpse of a rare brown bear in Spain after 150 years