Ready to Appear With Sarwat Gilani and Zahid Ahmed

Popular Pakistani actor Zahid Ahmed and actress Sarwat Gilani are ready to appear together soon. Both the actors are part of director Mehreen Jabbar's next project and will be seen playing the lead roles.

After the hit web series 'A False Love Story' on Zee Five, Mehreen Jabbar is currently working on her new project which is another web series. Zahid Ahmed can be seen in the story shared by Sarwat Gilani and at the same time he has written that 'return to work, next web series is coming soon'. 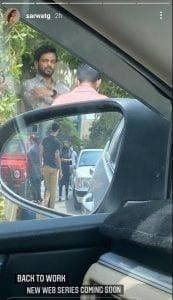 The name and topic of the web series have not been revealed but according to social media posts, its story has been written by Rida Bilal. Remember that Rida Bilal has written the story of dramas like 'Selfish' and 'Extreme' before. It may be recalled that Zahid Ahmed had recently appeared in Sheheryar Munawar's short film 'Prince Charming' of which Mahira Khan was also a part.

Actress Sarwat Gilani, on the other hand, last appeared in the web series 'Chariles' released on Indian OTT platform Z5 last year. Recently, the trend of making web series and short films has increased in Pakistan and popular actors are also becoming a part of it.

Firdous Ashiq Awan : We decides to deal with inflation

Changes In DNA Due to cancer occur years ago, Research

Pakistan needs 15 votes to get off the grey list

Actress Mahira Khan has been relieved of her headache