Feroze Khan and Aliza  Sultan confirmed their divorce on September 21 last month; the two got married in 2018 and have two children together.

Aliza  Sultan, while confirming the divorce, also accused the ex-husband of domestic violence.

Later, Feroze Khan added his confirmation of the divorce, stating that it occurred on September 3, 2021, and that on December 19, 2021, they filed a petition in the Family Court of Karachi for the transfer of the children, which is currently being heard.

During the hearing held a few days ago, Aliza  Sultan submitted the evidence of self-torture to the court through the lawyer. In contrast, the court allowed Feroze Khan to visit his children twice a month under strict conditions.

When the details of the evidence of torture submitted by Aliza  Sultan in the court came out, people took Feroze Khan with open arms. At the same time, on October 25, the names of Aliza and Feroze Khan continued to trend on Twitter.

Regarding the evidence of torture presented by Aliza  Sultan in court, Geo TV said that she had submitted the photos and the medico-legal report in court.

The report stated that according to the evidence submitted by Aliza  Sultan, Feroze Khan brutally assaulted his ex-wife at least three times, leaving Aliza with bruises on her body.

• Blunt injuries to both arms + back and chest. Ya Khudaya!!
Why do we raise voice only when they’re dead?
Why do we blame them when they manage to escape?#JusticeForAliza https://t.co/BTWvHvVgYz pic.twitter.com/pORU7fTvS8

Photographs submitted to the court showed injury marks on Aliza  Sultan's face, arms, and near the back, which was also confirmed by the submitted medico-legal report.

I hope and pray you get the justice you deserve, Aliza. https://t.co/XvNRH6ORO5

After the pictures of Aliza  Sultan's torture, many celebrities supported Feroze Khan with open arms.

Actress Mariyam Nafees shared pictures of Aliza h Sultan's torture, expressed sympathy with her, and apologized for treating her so badly.

She assured Aliza  Sultan that she and God were with her. In another tweet, she also shared the torture report on Aliza and said that marks of torture were found on several parts of his body.

At the same time, Maryam Nafees also used the hashtag 'Justice for Aliza'. 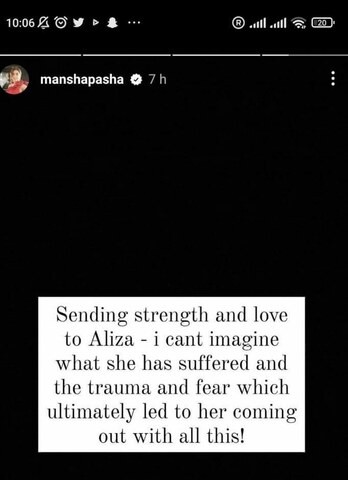 He also said in another tweet that signs of torture were found on different parts of Aliza  Sultan's body.

Actress Mansha Pasha also condemned the torture of Aliza  Sultan and wrote that she could not describe the pain she was going through and wished her well.

Model Mushk Kaleem also posted about the violence against Aliza  Sultan and expressed solidarity with her.

In her post, she appealed to people to write Feroze Khan's name and punish him while standing with Aliza  Sultan and getting her justice.

She wrote that people who torture and cheat on wives should be banned from the showbiz industry.

Actress and model Anoushey Ashraf also shared pictures of Aliza  Sultan and expressed solidarity with her while condemning the violence.

Anoushey Ashraf wrote that she hoped the court would give her justice and punish the accused.

Films Will Be Released on This Eid Two Years Later

Musharraf's detailed decision in the case justified the concerns

Why Asim Azhar's Criticism and Advice on 'Tum Tum'?

YouTube announces the release of the documentary on Justin Bieber's life