Personalities Are Saddened by the Closure of Bannu's Only Women's Park

Showbiz personalities have expressed regret over the closure of the only family park opened a few years ago for entertainment in Bannu city of Khyber Pakhtunkhwa (KP) after protests by local religious people.

Actress and model Amna Ilyas shared a screenshot of the news about the closure of Bannu's women's only park and expressed regret.

Amna Ilyas wrote in her story that now men are starting to look obscene for women to go to the park to get fresh air and hang around.

She wrote that men should be banned from going there instead of stopping women from going to the park, creating a real problem. 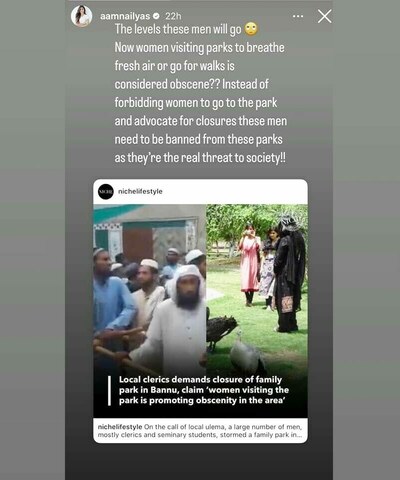 Like her, actress Ayesha Omar shared a screenshot of the news of the park's closure, expressed regret, and wrote, "All happiness should be killed".

Ayesha Omar wrote that women should be banned from breathing and going out in the sun; why are they still alive?

Apart from the two actresses, many people on social media expressed regret over the decision to close Bannu's only women's park.

Dozens of people led by local personalities demonstrated there on August 22 to close the park in Bannu and later announced the park's closure after negotiations with the local administration. 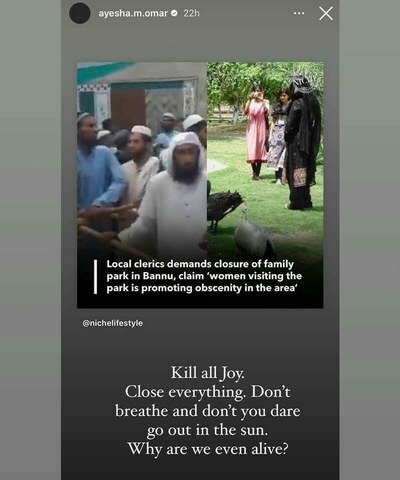 According to the local leaders, women going to the said park is ending the tradition of veiling, and men also go there, and this practice is causing indecency.

It is also worth mentioning that the said park was opened as a family park only a few years ago. Still, later when the religious people expressed their displeasure when men and women went to the park together, the administration restricted women only to the park. I had set aside to go.

But recently, on the occasion of Independence Day, men, especially young boys, gathered outside the park after women from across the country came there, prompting locals to demand the park be closed and the administration to close it later. Now announced to close the park. 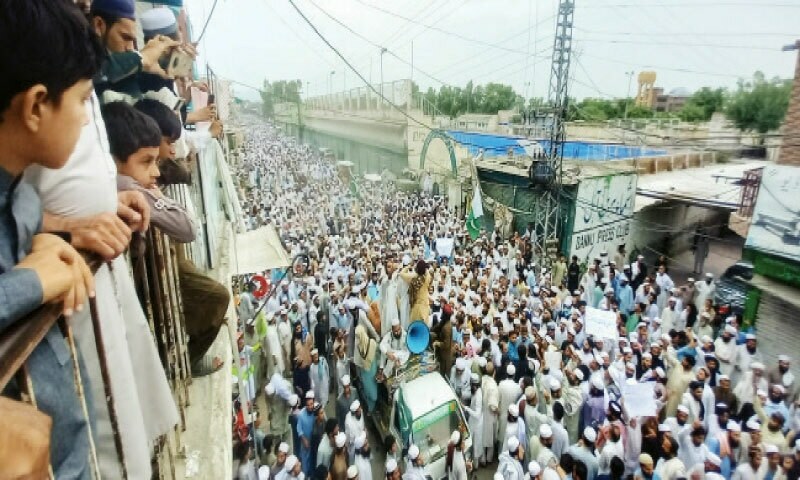 If Fawad were not married, she would have developed a relationship with him, Sonam

Rashid Mahmood announces not to work for PTV

Give Yourself The Perfect Party Entrance With Houston Party Venue