No one called '2 Takky ki Larki' at the airport: Ayeza Khan

Pakistani actress Ayeza Khan has been the focus of Mehwish's negative role in her play 'Mere Pas Tum Ho.'

Someone liked his role, then one criticized the actress for playing a negative role.

Well, many days have passed since the play 'Mere Pas Tum Ho' has ended, yet some controversy regarding the play continues to come in the coming days.

It may be recalled that in one of the scenes in the drama, the main character Danish called Ayeza's character a Do Takky Ki Larki, after which there was a controversy over the dialogue on social media.

Ayeza Khan has not released any statement regarding the controversies that have come up till now, but now the actress has been quietly criticizing those spreading rumours about her breaking the silence.

A user on social networking site Twitter claimed that he had seen Ayeza Khan at the airport a few days ago, where some men were using bad words for the actress.

The user wrote in his tweet, "I was at the airport and incidentally I saw Ayeza Khan there, she was walking very fast and the men there were screaming and calling the actress a 2 takky ki larki. I got very angry ”. 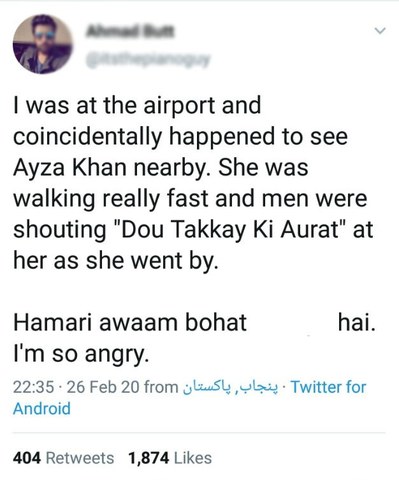 Following this tweet, a new debate on social media sparked, where some people sympathized with the actress, while some wrote that it would be the end of her role.

According to the actress, 'meaning somebody said and the whole world believed, is there any video or any other evidence?' 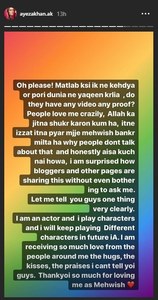 "People love me like crazy, the less I thank Allah, the more honour and love I have got, I don't know why people talk about it," said Ayeza Khan.

He added: "The fact is that nothing happened. I wonder why bloggers and websites are posting this kind of news without asking me. This is false news. '

"Let me clarify one thing, I am an actor, I play a unique role and I will continue to do so in the future, I am very loved by my fans," said Ayeza.

Related Posts
Showbiz stars appeal to people to stay home
There is not much difference In Mahira Khan’s and my age : Meera
A year has passed since the Legendary actress Roohi Bano left the world
Sarmad Khoosat: Pressure to Stop the release of “Zindagi Tamasha”
There Are 'Flaws' in the Fia Investigation, Meesha Shafi's Legal Team
Flight is being arranged for Pakistanis stranded in Thailand
FATIMA SOHAIL REACTS TO MOHSIN ABBAS HAIDERS PRESS REVIEW.
List of the Most Popular Animated Images of 2019