The Chinese city of Wuhan, considered the epicenter of the coronavirus epidemic, ended the lockdown last month after taking control of the epidemic.
So Pakistani students studying at Central China Normal University in Hubei Province organized a dinner party to meet each other.

Naseem Baloch, a Pakistani M.Phil student at the university, said that after the lockdown, we all bought mutton and vegetables from the meat and vegetable market and prepared a frying pan in the university garden. They enjoyed each other's company.

He said that all these people celebrated together to enjoy the joys caused by the epidemic.

According to Naseem Baloch, after several weeks of meeting each other, we did celebrate, but during that time we took all the security measures and took all the precautionary measures.

For students living in Wuhan, the whole experience, from the spread of the virus to the ban on relocation, was particularly painful, and according to Naseem Baloch, many became depressed because of it.

"We were not allowed in each other's rooms and cooking was prohibited. The university administration would deliver the necessary items to our door so that we could not leave the rooms," he said.

Fear and anxiety over the onset of the Corona outbreak in Wuhan have prompted many to call on the government to repatriate stranded students. 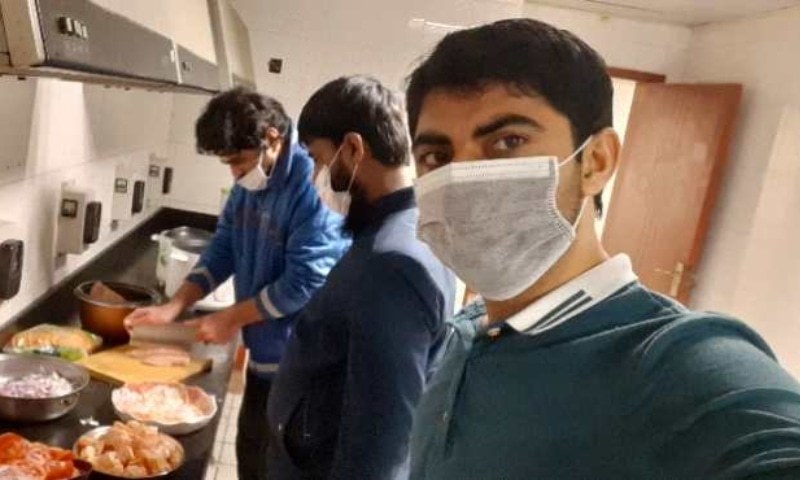 Routine life is being restored in Wuhan, Photo: Yasir Habib Khan
But with the passage of time and a better understanding of the situation, this argument also came to an end.

According to Naseem Baloch, since the end of the lockdown, the demand for repatriation has also ended.

"We are still not allowed to leave the university campus, but we are not bothered by the ban as everything we need is available inside the campus," he added.

Despite the university's ban on students, students are happy to have the opportunity to meet each other.

"We can now sit together for at least an hour and a half to eat, compared to the last few months," said Ali Nagri, a Ph.D. student in international relations at Wuhan University.

"We get together for sehri and iftar, after which we worship together. Halal food options are also available at the university's Middle East store," he added.

According to Ali Nagri, Pakistani students are now grateful that they were not sent back to the country.

He said that Wuhan was the epicenter of the coronavirus and the students were relieved when they heard that not a single case of the virus had been reported there.

"The students are thankful that they were not sent back to Pakistan where the situation is getting worse with each passing day," he said.

Peng Zheng, Deputy Consul General of the Chinese Consulate in Lahore, said, "The Chinese government has taken care of the Pakistani students by considering them as its own. All facilities are being provided at their doorsteps."

"We are in touch with Pakistani students and we hope they can complete their education there," he added.

I don't understand why people cry over separation, Javeria Abbasi

Related Posts
Men Get Terrified When They See Me, Rebel Wilson
Actress Amna Malik Share her Pictures Clicked in Istanbul Turkey
Why February 2020 is unlucky for India
Narendra Modi get criticized, American comedy critic show stopped broadcasting in India
Saba Qamar is Recognized for her Unique Acting
Showbiz Personalities Angry Over Rains in Karachi
After a Week of Searching, the Body of Actress Naya Rivera Was Found
Fans Congratulate Sajal Aly on Her Birthday