Leading actress of Pakistani drama industry Manal Khan has been under criticism from social media users since yesterday due to a story uploaded from her Instagram account.

The actress had posted a picture of a table decorated with fruits on her Instagram stories, but social media users pointed out that Manal Khan had allegedly shared the story in a story uploaded on the Instagram account of famous Hollywood model Kylie Jenner.

At this point, social media users are trolling Manal Khan a lot, memes are being made about him, and the actress's name is also trending on Twitter.

One person asked, "Does Manal Khan think that we know or follow Kylie Jenner?"

Does Minal Khan really think none of us follow or know who Kylie Jenner is 😭😭💀💀😭😭 pic.twitter.com/fxLFrVwNR2

Some users used sarcasm and advised Kylie Jenner not to imitate the Pakistani actress.

Guyz stop trolling Minal Khan.
she was there with Kylie Jenner😭🤣#MinalKhan pic.twitter.com/ppqY8HPZWA

Some users have also linked Manal Khan's move with materialism that actors can go to some extent to look rich and unique.

They are so materialistic I mean can do everything to show they're rich and different lol #MinalKhan pic.twitter.com/otS1MzwtSu

One user advised the actress, "Don't copy, even if it's just on social media. Promoting a false lifestyle on social media means you're making fun of the IQ of your social media followers." It's unbelievable how fragile the ego of so many celebrities in the entertainment industry can be.

Dont be #Fake, even if it is just "social media".

Promoting false lifestyle on social media means you're mocking the IQ of your followers!

It is unbelievable how fragile the ego of many of the famous people from entertainment industry can be.#MinalKhan#KylieJenner pic.twitter.com/qpAWvV0fVX

Interestingly, despite being trolled by social media users, actress Manal Khan did not remove the story from her Instagram account but became a part of it herself and shared a meme made on her. 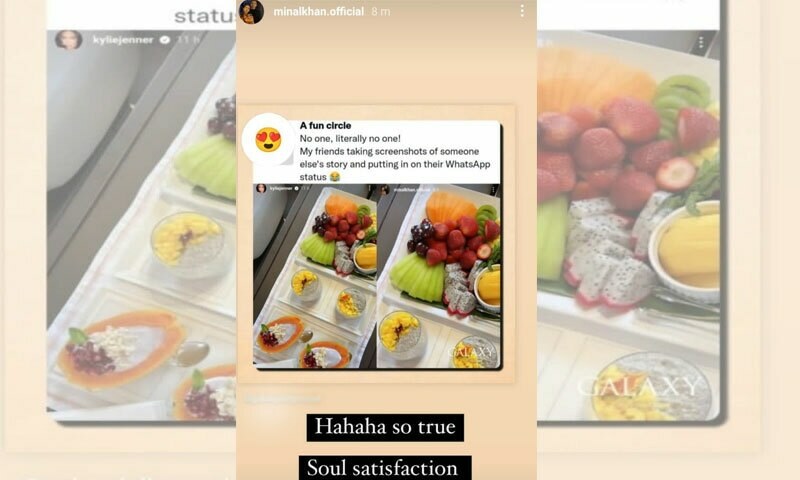 Reham Khan: The only Prime Minister who was disgraced for prices of petroleum products