In July last year, it was initially reported that Pakistan Super League (PSL) team Peshawar Zalmi might appoint Turkish actress Esra Bilgic as its brand ambassador. The news came to a head when Javed Afridi, the head of Peshawar Zalmai, asked fans in her tweet whether Esra Balgich, the actress (Halima Sultan) of Turkish drama Ertugrul Ghazi, should be appointed as Peshawar Zalmai's ambassador.

Fans demanded that the Turkish actress be appointed brand ambassador. After that, Esra Bilgic in her short tweet in July 2020, mentioning Javed Afridi and Peshawar Zalmi, wrote that she would soon announce good news in this regard. In addition, Esra Bilgic recently shared a photo of the Peshawar building in her Instagram story, calling it a city of flowers, saying that she has come to Pakistan.

However, the arrival of Esra Bilgic in Pakistan could not be confirmed, after which rumors started circulating that she might become Peshawar Zalmi's brand ambassador in the sixth season of PSL, which is why she visited Peshawar. In this regard, fashion magazine Hello Pakistan gave a picture of Esra Bilgic in its Instagram post and wrote in the caption that there is news that Turkish actress will become Peshawar Zalmi's brand ambassador in PSL 6. 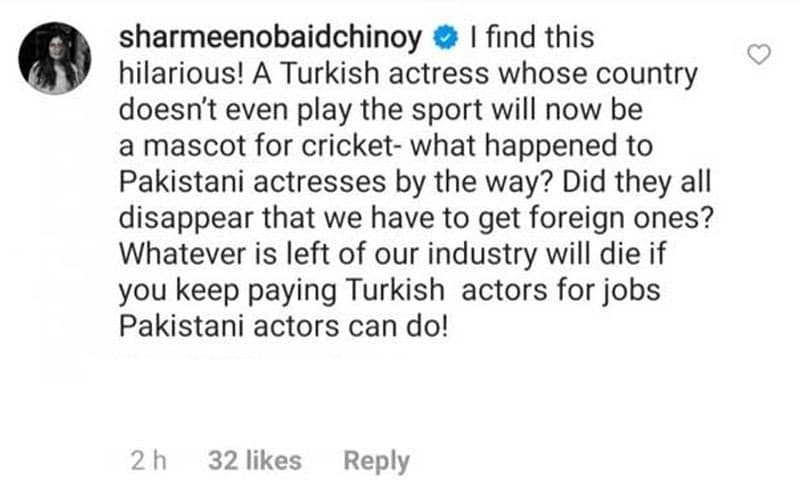 Dozens of people commented on the fashion magazine's post, many of whom expressed happiness, but some also expressed anger at the news. Oscar-winning filmmaker Sharmeen Obaid Chinoy was among those who expressed outrage at the news of Esra Balgich being appointed as Peshawar Zalmai's ambassador. Commenting on the magazine's post, he termed the suggestion that Esra Bilgic was being appointed as Peshawar Zalmai's ambassador as ridiculous. 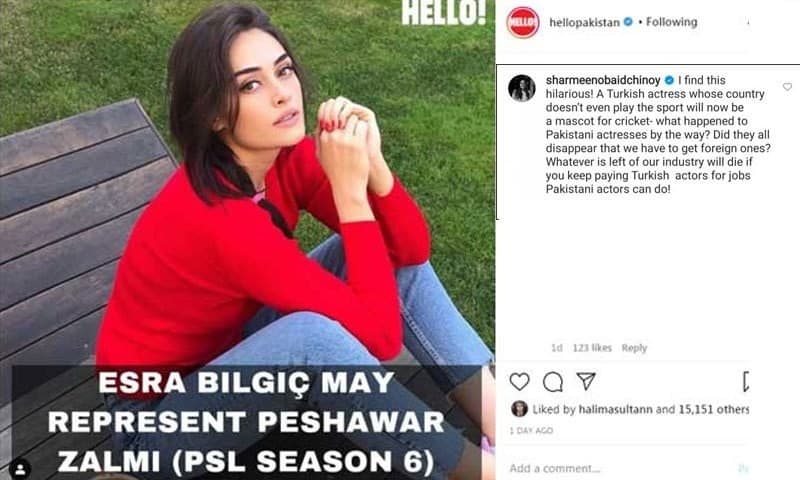 The Oscar winner argued that if Turkish actors were given similar opportunities, the Pakistani industry would be on the brink of collapse and Pakistani actresses would not be able to do anything. Pakistani fans criticized Sharmeen Obaid Chinoy for writing comments against the Turkish actress, saying she did not expect such a comment from an award-winning filmmaker.

Dozens of people disagreed with Sharmeen Obaid Chinoy's comment and some criticized the filmmaker, pointing fingers at her work and writing that he sold Pakistani stories to gain fame. However, some people also commented in favor of Sharmeen Obaid Chennai and said that they agree that Pakistani brands should only give opportunities to Pakistani actors. 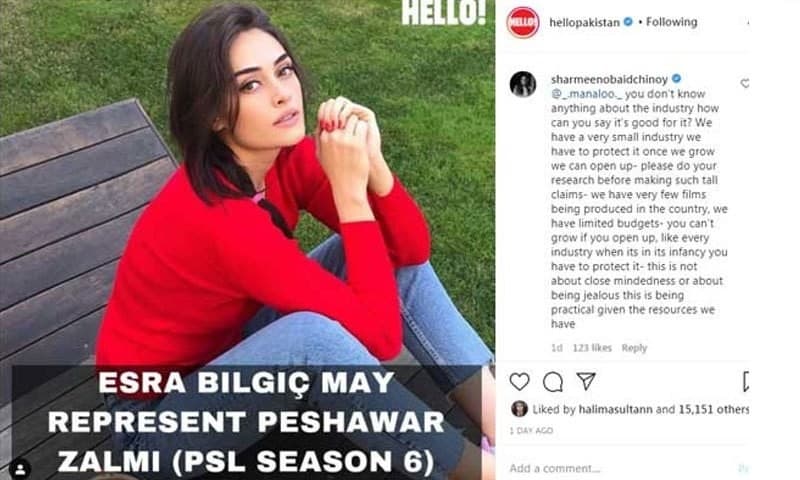 Sharmeen Obaid Chinoy advised her self-critics to do some research on the Pakistani showbiz industry before talking or criticizing it, then pointing fingers at them, and at the same time, he clarified that She is not a cricketer and she is not opposing the game but she is defending her industry. It is to be noted that even before Sharmeen Obaid Chinoy, many showbiz and political personalities have opposed the appointment of Turkish actors as ambassadors of Pakistani brands.

However, Esra Bilgic has been appointed ambassador by mobile company Q Mobile and network company Jazz, while the Turkish actress has also worked with fashion brand Khadi.

Related Posts
Bride was Arrested and the Bridal was Married to her Neighbor
Mahira Khan: The News of Secret Marriage
Rameez Raja, Asad Ali Khan Nominated Members of Pcb Board of Governors
The government has stopped the release of 'Zindagi Tamasha'
Mahesh Hayat Called the French Actor Her New Crush
Pakistanis teach 'ethics' on the image of actress Esra Bilgiç as Halima Sultan in Ertugrul Ghazi
Fear of 'Corona Virus', 'IIFA Awards' canceled
I did not quit acting, Just took a break, Hamza Ali Abbasi