Mahira Khan Was Ridiculed as "shameless" for Liking Tea

Showbiz personalities are often criticized on social media for posting their bold photos or a controversial issue.

However, this time 'superstar' actress Mahira Khan was ridiculed as 'shameless' for merely sharing a picture of a cup of tea and expressing her love for the tea.

It so happened that actress Mahira Khan shared a picture of a cup of tea on her Instagram two days ago and wrote in the caption, "By the way, I am not a beautician, but I do look at the shape when it comes to tea."

The actress shared a photo of a half-full cup of tea in a tray, which also contained a book of poetry and a poem from the book. Many people commented on the actress' tea post and agreed that they are all the same when it comes to tea. Some people wrote that tea is a strange thing, they don't drink it, yet they remember it.

In her shared photo, some people expressed their love for tea like an actress and said that they also like tea very much.

Some fans even expressed their desire to have tea with the actress, but one user even started taunting the actress over the tea picture.

A girl named Sana Malik called the actress 'shameless' and criticized her and wrote about how she was sharing inappropriate pictures in an Islamic country. 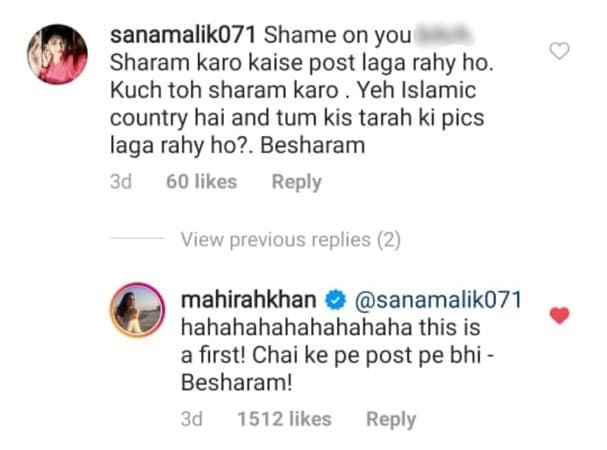 To which the actress replied that this is the first time that she is being called 'shameless' even for sharing a picture of tea.