Women's rights organizations announced next week to hold 'Women's March' nationwide on March 8 on International Women's Day, and the court also allowed women to march for their rights.

Where the court has given permission to marry women, the court has directed the organizers of the march to ensure that inappropriate slogans and banners are not used during the march.

In addition to the judicial verdict, there has been a nationwide debate about 'woman march' and everyone seems to be expressing their opinion on the issue, apart from the political leaders.

The echo of the debate on 'woman march' was heard in the Senate, while in general public and social media, 'women march' has been the subject of debate.

In the program 'Today with Ayesha', the three men discussed the 'Woman March' to be held next week, during which Marvi Sarmad said that 'women will have their own bodies, they will have children. Will not, if you do not want children will not be born. ' 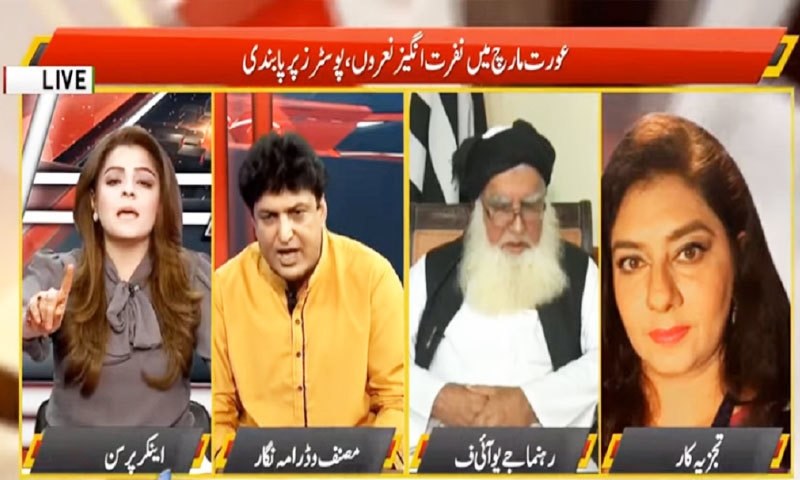 The female host didn't bother to close the live show for a few minutes, despite inappropriate discussion - screenshot
Marvi Sarmad addressed the guest of the program Senator Maulana Faiz Muhammad during the debate and said, "What do they want the girls to be 'rape' in the country and keep quietly oppressing?" Yes, women will now make their own decisions.

Marvi Sarmad, during his discussion, added that the court has given conditional permission to women and will protest against the women out peacefully but lacks tolerance of women in society.

After Marvi Sarmad, when host Aisha Ahad asked Khalil-ur-Rehman Qamar that the controversy slogans of 'Woman March' were also objected to people who spoke about women's rights and now the court should not use such slogans. And if this time women are going out for their rights, is it necessary to protest or unnecessary?

On the host's question, Khalil-ur-Rehman Qamar addressed both guests of the program, Marvi Sarmad and Senator Maulana Faiz Mohammad, at the beginning of their conversation, saying that they request that they both listen fully and in-between. I don't speak

Launching the talk, Khalil-ur-Rehman Qamar said that if the court has ordered to dissolve slogans like"Mera Jisam Meri Marzi" (My body is my decision) then when he hears women like Marvi Sarmad talking about it, then his Shakes'.

To which Marvi Sarmad once again chanted the slogan "Mera Jisam Meri Marzi" (My body is my decision), Khalil-ur-Rehman Qamar became even angrier and he left the circle of distinction and said to the female leader, 'Do not say in the middle you are in your body. What, look at your body '.

Related Posts
Indians Angry on Company Over Removal of Atif Aslam's Song
'Rishi Kapoor' is an era that has come to an end: Some Best Movies of Rishi Kapoor
If I Get a Good Script, I Will Work on a Small Screen, Atif Aslam
Sumi Chauhan's Clear Answer to Anyone Who Uses an Inappropriate Word for Wife
R. Kelly's trial in sex offenses delayed until September
The Spanish novelist who blends philosophy into the story
Hollywood actress arrested for murdering her mother
Senior actress Durdana Butt dies of corona virus