Kangana Ranaut, known as the Bollywood scandal queen, has been in the news this time not because of her statement but because of her stupidity and she considered a fake video as a real video and shared a post on it.

According to Indian broadcaster New Delhi Television (NDTV), Kangana Ranaut shared a screenshot of the fake video in her Instagram story, calling the CEO of Qatar Airways a fool and a man of arrogance.

I'M DEAD! 🤣🤣🤣🤣🤣🤣🤣
This is MUST WATCH!
Watch this interview of the CEO of Qatar airways, on the call for #BycottQatarAirwaysQatar by Vashudev
Watch till the end! pic.twitter.com/52YUJLDCYj

Although Kangana Ranaut later deleted Instagram stories after finding out the truth, she was ridiculed on social media and Indian websites and became the talk of the news as she considered the fake video to be real.

The fake video, which he shared as genuine, distorted the statement of the CEO of Qatar Airways.

The video was a video of her interview with Al Jazeera, which was edited into a comedy video, but Kangana Ranaut thought it was true and expressed her opinion without thinking. 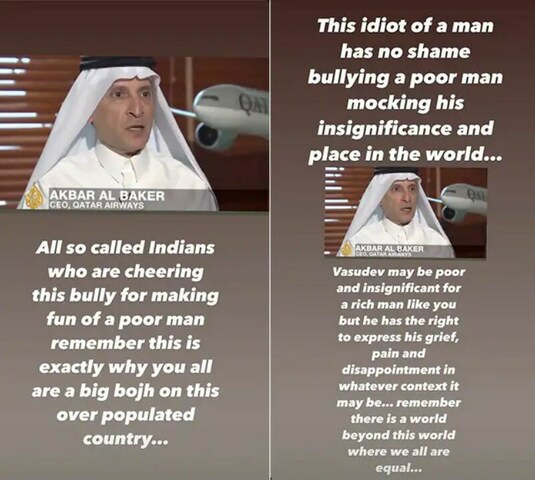 The video of the CEO of Qatar Airways was edited and a voiceover was added to it, which showed him moving his lips.

In the Arab-accented voice included in the video, Qatar Airways CEO Vishwa Deo's name is heard begging him to withdraw the slogan 'Boycott Qatar Airways'.

Arey bhai, many are believing it to be real. Asking us to fact check. 😭

In the edited video, Akbar Al-Bakr is heard saying that Vishwa Deo is the biggest shareholder of Qatar Airways, who has bought shares worth 620 Indian rupees and because of him his company is running.

In the fake video, he further says that if Vishwa Dev withdraws the announcement of 'Boycott Qatar Airways', the company will also give him a plane and that he can also be given two litres of petrol for free.

In the fake video, Qatar Airways CEO Vishwa Deo is heard calling his friend and saying that his aviation operation has been completely stopped by 'Boycott Qatar Airways'. Kangana Ranaut was also mocked for believing the video to be original and commenting on it.