TikToker Janat Mirza and leading actress Bushra Ansari have feuded on social media. While Bushra Ansari referred to the social media stars as "ignorant," Janat Mirza referred to the elder actress as "Amanji" and asked her to learn the facts before criticizing. Janat Mirza presented a comprehensive version of the events in a video statement, claiming that he received a chain as part of a PR package that he wore to make a TikTok. 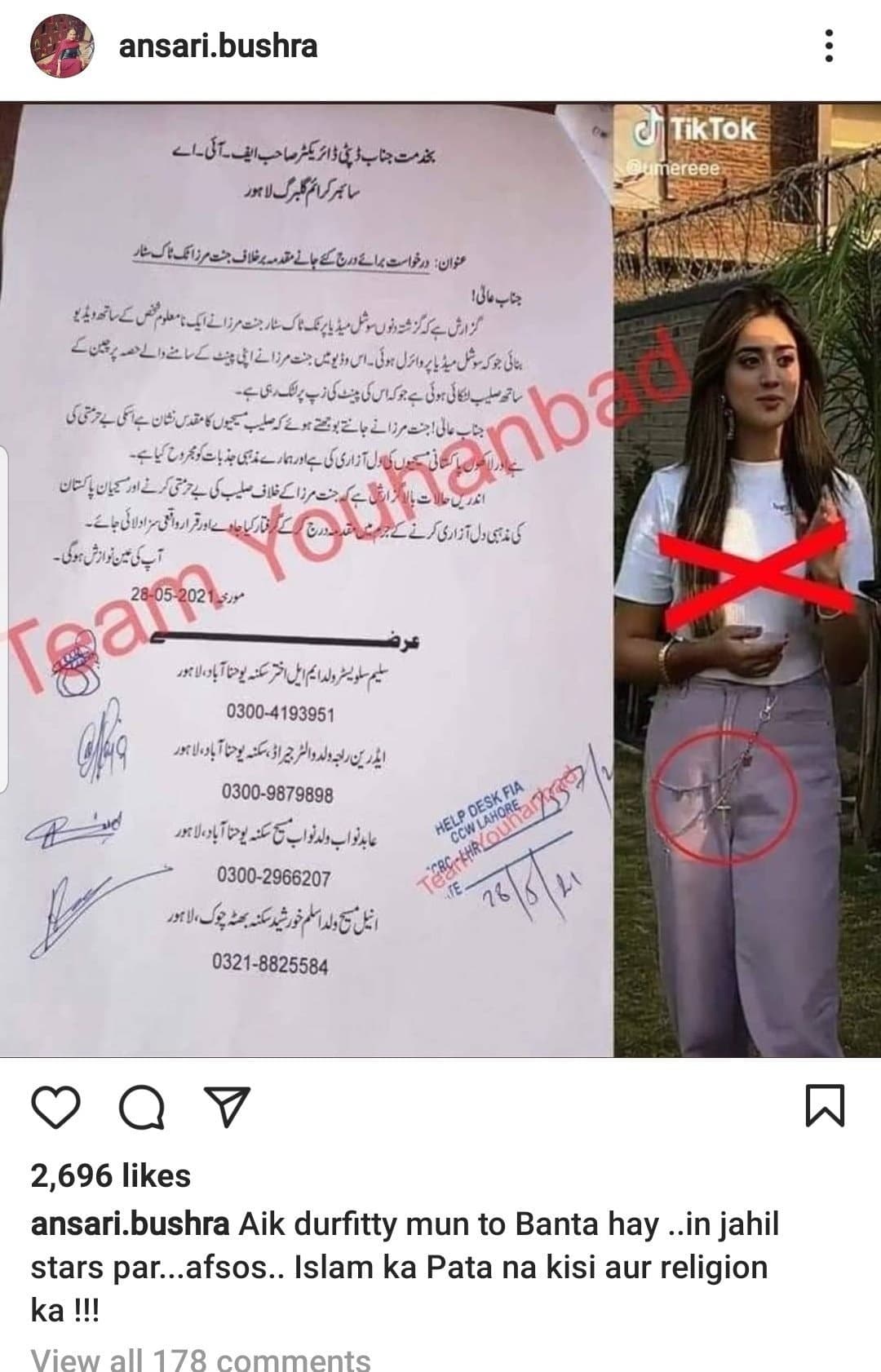 Janat Mirza stated that he learned from social media users that the Christian sacred emblem 'Cross' is connected with this China, for which he apologized to everybody. It should be noted that Janat Mirza was wearing the aforementioned chain on his jeans, which prompted the Christian community to submit a complaint with the Federal Investigation Agency's cybercrime wing (FIA). "These uneducated stars have no knowledge of Islam or any other faith," Bushra Ansari commented with a photo of the petition.

Although he eventually erased the tweet, a screenshot of it became viral on social media. Not only Janat Mirza but also her sister Alishba Anjum reacted angrily to Bushra Ansari's remark. "Please don't make an opinion about somebody before you meet them, Amanji (Aunty Bushra)," Janat Mirza wrote in his narrative. "I respect you a lot," Janat Mirza said, "but you can't malign someone without knowing the facts." Aunty, how can you talk about Islam when you don't even operate a Tablighi Jamaat?"

"You also sing, you dance, you had dance routines on award shows, yet today you insult others, amazing," Janat Mirza replied to Bushra Ansari. "All I can say is before you criticize someone, look at your collar," he continued. On the other side, Alishba Anjum, Janat Mirza's sister, harshly chastised Bushra Ansari, saying that she should not speak about Islam because acting, singing, and dancing are forbidden in Islam.

A post shared by All Pakistan Drama Page (@allpakdramapageofficial)

Alishba stated that he made a mistake from heaven, that he is extremely sorry for it, and that he also apologized. He also stated that those who showed heart forgiven heaven, but you are using such language that they are implying Islam and other religions.

"We know Islam very well," TikToker's sister stated. You are not a resident of our residence. We're quite aware that we write tick tuck tunes. It is extremely immoral, yet in Islam, women are required to wear veils. So, why don't you hide? In Islam, singing and acting are prohibited.

How to cook soybeans?

Corona cases are declining in the United States, Trump said

Related Posts
'Rishi Kapoor' is an era that has come to an end: Some Best Movies of Rishi Kapoor
Rekha Bhardwaj will perform live for Pakistani fans
Showbiz Diary: Anger of Kangana, Whose return was on the screen & Salman Khan
Islahun Khatun (Gülsim Ali İlhan) and Ayeza Khan Will Be Modeling for Maria B.
Fan's Advice to Show Mahira Khan Having a Romance With Her Cousin in the Play
No 'private Relationship' With Asim Azhar, We Are Just Friends, Hania Amir
Ayeza Khan Has Reached the Same Number of Insta Followers as Aiman Khan
What is the most searched in Pakistan in 2019