Bella Hadid, a Palestinian-American supermodel, claimed in an Instagram post three days ago that the social sharing application Instagram had deleted a post about her father. The supermodel shared a screenshot of the message sent after the post was deleted from Instagram in her story, expressing frustration over the move of the social sharing app. According to fashion magazine Elle, Instagram removed the old passport post of the father shared on the story on July 7 by Bella Hadid. The model's father's shared passport clearly stated Palestine at the birthplace of his father, Muhammad Hadid.

And the model claimed that Instagram actually removed her father's passport post because it said her father's place of birth was Palestine. Following the removal of her father's passport post from Instagram, the model asked the social sharing app if her removed post contained material related to threatening, intimidating or sexually harassing someone. In her story, she shared a screenshot of the community rules posted by Instagram, which contained instructions from the social sharing application that sexual harassment or nudity, including hate speech, intimidation or drama post based on is not allowed. 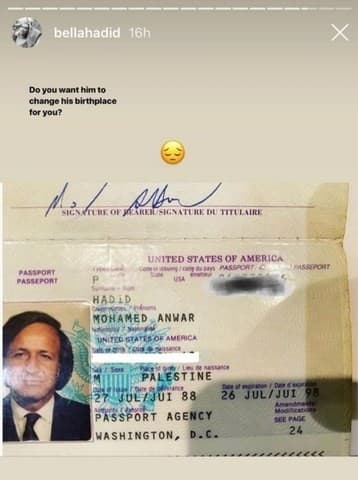 The model shared a community message on Instagram, accusing the social sharing app of being unfair to her by removing a post about her father. Bella Hadid appealed to her fans to share posts about her parents after the post was removed from Instagram and to tell the sharing application where her parents are from. Following Bella Hadid's appeal, her father, sister model GG Hadid and other family members also shared a photo of Muhammad Hadid's passport and others also criticized Instagram.

According to the spokesperson, Instagram does not allow sharing of personal information including passport number, however, the passport number was hidden in the photo shared by Bella Hadid and the application accidentally deleted her post.

The players who won the matches for Pakistan, made them part of the team: Mickey Arthur