Indian singer Sonu Nigam made a controversial statement on the social networking site Twitter in 2017 regarding the sound of the call to prayer, which led to the singer being severely criticized and he also closed his Twitter account.

And now, once again, Sonu Nigam is facing criticism over the same tweets she made in the past, as she is based in Dubai, not India, due to the rapidly spreading epidemic of coronavirus.

The social networking site Twitter has seen tweets from users boycotting the Indian singer, while many have criticized him for not having a problem with the sound of the call to prayer in Dubai.

In 2017 Sonu Nigam wrote in his tweet that 'God bless you all, I am not a Muslim and I have to get up in the morning after hearing the call to prayer, when will the religious coercion end in India'. 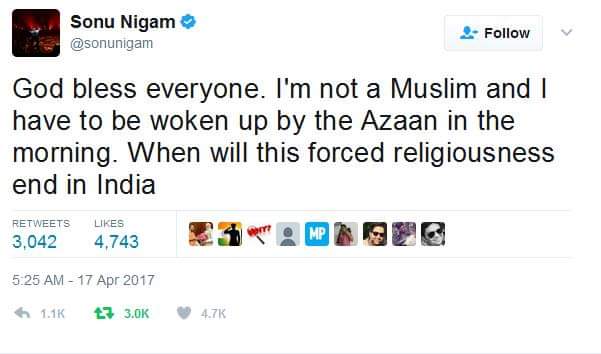 The same tweet of the singer has been trending again for several days now, after which many users also tagged the Dubai police and requested that strict action be taken against the singer.

According to the Gul News report, Sonu Nigam's son is completing his education in Dubai, insisting that Sonu Nigam is staying in Dubai instead of India these days.

The report further said that his son did not want Sonu Nigam to stay in India at such a time.

That's why people on Twitter are reminding the singer of his 2017 tweet.
In an interview, the singer said, "I decided to leave Twitter because anyone there can say anything about anyone and no action can be taken against them."

Sonu Nigam had said that users on Twitter do not shy away from criticizing personalities like Amitabh Bachchan.

Sonu Nigam, on the other hand, is organizing online concerts for her fans from Dubai so she can entertain people during the Coronavirus.

I don't understand why people cry over separation, Javeria Abbasi

Related Posts
Once Again, Rumors of Shraddha Kapoor's Marriage
Misbah-ul-Haq and Waqar Younis have resigned as national team coaches
Mohsin Abbas Haider and Nazish Jahangir Will Soon Be Seen Together in a New Drama
Shant Singh Rejected My Films for Big Production Houses, Anurag Kashyap
Hareem Farooq unveils the important secret
A female patient plays the violin in an operation theatre at a hospital in London
Anurag Kashyap announces to auction his award for Corona victims
I don't think Khalil-ur-Rehman is Haters of Women, Nadeem Baig