And now Falak Shabbir has told for the first time how the relationship between him and Sarah Khan was established and how he proposed marriage to the actress. Speaking to Dawn Images, Falak Shabbir said that the first formal meeting between him and Sarah Khan took place in 2019 on Hum TV Bridal show. He said that after the meeting, they had planned to spend the rest of their lives together. 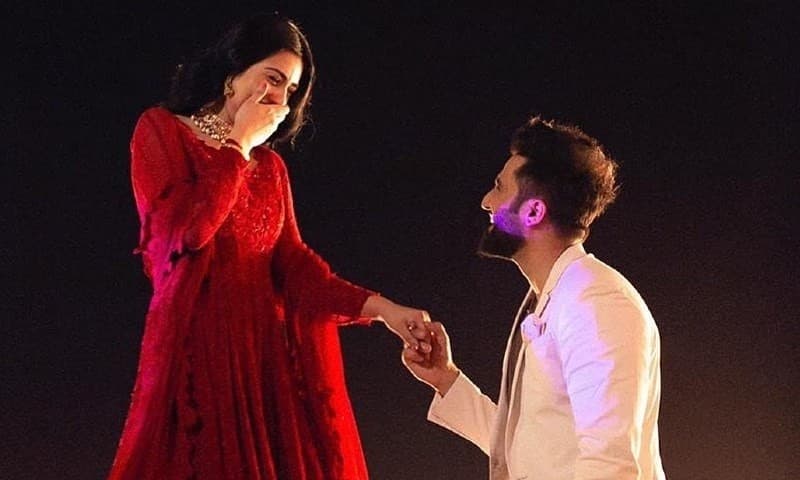 The singer said that before the said meeting, there were superficial meetings between him and Sarah Ali Khan, but that day he was sitting alone drinking tea, so he offered Sarah Khan and Noor to have tea together. After a detailed discussion with them, a new era began between them. According to Falak Shabbir, the second important and formal meeting between him and Sarah Khan took place at a hotel on MM Alam Road in Lahore when he was released after performing a show.

The singer revealed that after eating lunch together that day when he left Sarah Khan at home, he proposed marriage to the actress on the way. Falak Shabbir said that he did not tell Sarah Khan that he loved her but he offered marriage directly to her and asked her to meet her parents on the matter. According to the singer, a few days later, he talked to Sarah Khan's father which lasted for 2 hours. Earlier, Sarah had told him that if his father got up from the meeting 15 minutes earlier, he could not get married.

Falak Shabbir expressed happiness that everything went well and he met Sarah Khan's father for 2 hours and he agreed to marry him and Sarah. According to the singer Falak Shabir in the next phase, all his family members met and their marriage was arranged and then in the days of Corona's epidemic, they got married simply in a state of lockdown. According to Falak Shabbir, up to 40 people attended his wedding and they were all close relatives and friends.